The mother of a young man who collapsed after fasting for about 41 days has opened about his problems. 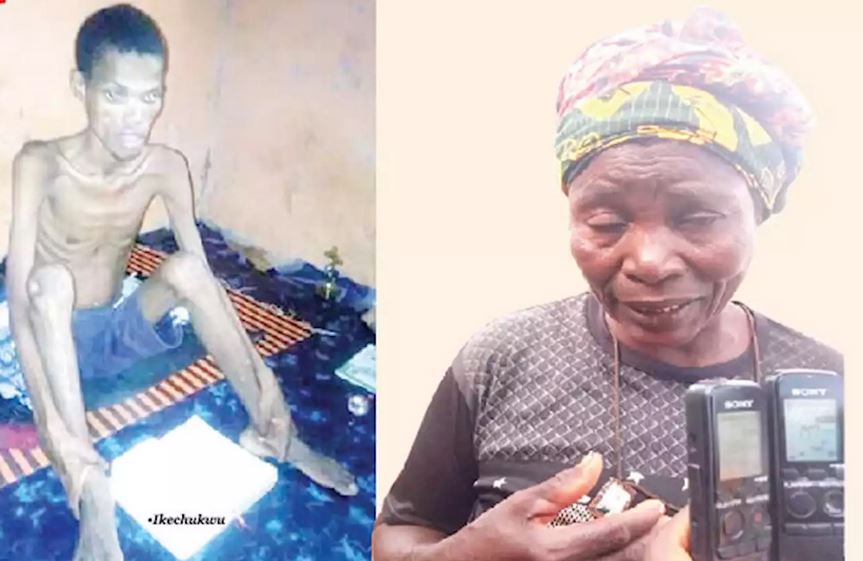 Mother of the Ebonyi teenager, Ikechukwu Oke, who fasted for 41 days, Mrs Elizabeth Oke, and his friend, Nteoma Chimaobi, speak on factors that could have made him to deny himself food and water for so long, in separate interviews with EDWARD NNACHI

What really happened to Ikechukwu Oke and what is his religious background?

My son, Ikechukwu, collapsed after fasting and praying for 41 days on a mountain in Abakaliki. He had gone to the mountain on July 23, 2019 without informing me or his elder brother, Obinna, who lives with him in Ishieke village.

He has a very strong religious background. As a Christian, he loves the things of God. He is a member of the choir in his church. He believes that problems can be solved through prayers.  He often speaks to other youths in our neighbourhood about the word of God.

Have you been compelling him to fast?

No. I have never forced him to fast. But I do know that as a dedicated child of God, he believes in the efficacy of prayers. He has always told other people that God can solve all problems. As a Christian, he must have picked up this habit of praying ceaselessly from the messages preached in the church. The truth is that we have been facing some challenges in our family and the need for a change may have pushed him to pray and fast.

How old is he?

He is 19-year-old. He is also an SS1 pupil of Ishieke Community Secondary School, Abakiliki. His elder brother enrolled him in that school and he prays to become a lawyer.

Whenever schools close for every session, Ikechukwu always works for me for a while before going to Onitsha in Anambra State to spend the rest of the holiday with one of his sisters.  He usually goes there to sell satchet water (pure water) and Gala to raise money for his school fees.

How long has he been fasting at home?

Before now, he wasn’t accustomed to fasting for too long. But I think the last time he returned from Onitsha he looked very worried. He told me that he wanted to go to Ishieke to see his brother. He promised to come back and harvest the cassava in our farm.  He wanted to process the cassava into garri and take some of it to school.  Later I learnt that he left his brother’s place and instead of returning to me as promised, he proceeded to the mountain, which is in Abakiliki, to fast and pray for 41 days.

How does he relate with his siblings? Is he a reserved person?

He relates well with his siblings. He is a quiet person, but he is equally sociable. Ikechukwu is the kind of person who will not speak out, if troubled. He would rather figure out how to solve his problems alone.

After waiting for him to return in vain, his brother decided to search for him in the village. But, like I said earlier, I didn’t know he was planning to fast for 41 days on the moutain.  Nobody else knew about it. We wouldn’t have allowed him to do such a thing, if we had known. It is true that he has been fasting, but not this long one that almost claimed his life.

What kind of problem could have made Ikechukwu fast for so long?

I asked him why he had to do that type of fasting and prayer without telling me and he said that he decided to fast because of the condition of our family.  He was supposed to be drinking water or eating fruits during such fasting.

There was a time he told his brother and me that he wanted to become a lawyer or a priest in the Roman Catholic Church, but there was nobody to assist him financially. This led his brother to enroll him in a secondary school.

Since my husband died in 1996, things have been very rough. It got to a point where Ikechukwu’s elder brother, who is my first son, decided to assist me in training him. Right now things are difficult for us. We are actually suffering.  We started suffering when their father died.

To survive, I usually do menial jobs. At present, I work as a labourer and get paid the sum of N1,400 per day. It is what I use in feeding my children and taking care of their other needs. One day, I almost lost one of my hands in the process.

Although my son, Ikechukwu’s elder brother, has asked me to quit working as a labourer, I don’t have another means of livelihood. Ikechukwu always complains about poverty in the family and the fact that we are not making any progress financially. He always fasts and prays because of this. He started praying regularly when he was 11 years-old.
***
Source: PUNCH Metro
Top Stories