Why I Barred My Aides From Criticising Buhari, Other State Governors - Gov Umahi


Mr Umahi handed down the order Thursday, in a statement by Francis Nwaze, his special assistant on new media. 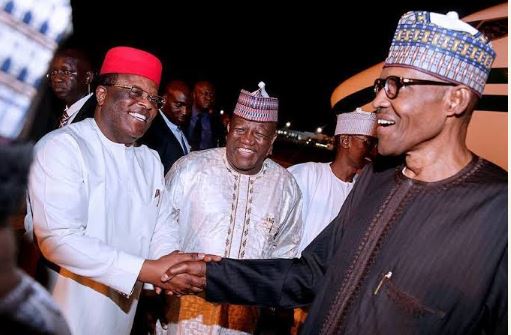 Governor Dave Umahi, and President Muhammadu Buhari
David Umahi, governor of Ebonyi State, has barred his political appointees from criticising President Muhammadu Buhari or any other state governor in the country.
Mr Umahi handed down the order Thursday, in a statement by Francis Nwaze, his special assistant on new media.
The governor said he gave the directive because criticising the president and state governors will add no value to his administration in the state.
Since he began his second term in May, the governor has fired some of his aides largely due to misrepresentations.
“The Ebonyi State Governor, David Nweze Umahi, has prohibited any of his political appointees from castigating or abusing the Nigerian President, Muhammadu Buhari,” Mr Nwaze quoted his principal as directing.
“Doing such to any government or any governor in this country has no value to add to his administration.
“The Governor has advised that anyone who wishes to throw an unnecessary stone against any of the above-mentioned leaders, should, in his or her own best interest, get ready to leave his government as such will attract immediate sacking.
“Any posting, henceforth, against the President, any governor or government from any of his appointees will attract immediate termination of appointment by him.
“If you want to castigate the President, his government or any governor, you must leave Governor Umahi’s government first. How does such castigation help the governor’s government?” he queried.
Top Stories