CUPP said that Buhari's leadership style and incompetence is a mockery of the efforts of the nation's founding fathers. 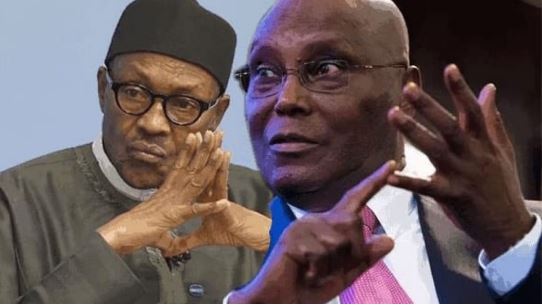 President Muhammadu Buhari and Atiku Abubakar
The Coalition of United Political Parties, CUPP, has accused President Muhammadu Buhari of turning Nigeria into a joke, adding that there is nothing to celebrate except pains, division, incompetence, banditry, tribalism, and hopelessness as the country turn 59.
CUPP said that Buhari’s leadership style and incompetence is a mockery of the efforts of the nation’s founding fathers.
In a statement signed its Spokesperson, Ikenga Imo Ugochinyere and made available to DAILY POST on Monday the political parties also claimed that Nigeria is now on the path to imminent collapse if Buhari is not stopped by the Supreme Court justices.
The statement added, “Tomorrow being Tuesday, 1st October 2019 Nigeria will be celebrating its 59th independence anniversary having gained independence from its colonial masters on October 1, 1960.
“That event of 1960 was celebrated with fanfare because of the hope that it will usher in a new lease of life for the nation and its citizens.
“Nigerians and friends of the nation expressed the strong belief that independence would bring prosperity to replace poverty, peace to replace insecurity and joy to replace years of anguish and mourning.
“Many years down the line, especially 59 years after, the Coalition of United Political Parties regrets that the nation has again returned into bondage under the administration of President Muhammadu Buhari.
“The Buhari administration that rode into power in 2015 on the promise of bringing change to the country has turned Nigeria into a huge joke among the comity of nations.
“Instead of positive change, the All Progressives Congress government has only succeeded in unleashing immeasurable pains, division, incompetence, banditry, tribalism, and hopelessness among other ills on Nigerians in full measure.
“For the nation’s 59th independence anniversary, there is indeed absolutely nothing to celebrate about.
“Buhari has so far displayed incompetence in administering this nation. His leadership style has rubbished all the efforts made by the nation’s founding fathers and past leaders to reposition the country for the benefit of all.
“At the moment, the nation’s economy is at its lowest ebb. There is an atmosphere of insecurity across the nation’s landscape. Terrorism, banditry, and kidnapping among others have become the order of the day.
“Under Buhari, the rule of law has been set aside as his administration chooses which court orders to obey and which ones to reject.
“The administration has inflicted fear on the Judiciary by harassing and arresting judges at will, therefore desecrating the temple of justice.
“Opposition parties note that if Nigeria continues in this same path under Buhari, the country is heading towards imminent collapse.
“We hope and pray that Justices of the nation’s Supreme Court will resist the siege placed on the judiciary by the present administration and do the needful on the appeal of the opposition presidential candidate, Alhaji Atiku Abubakar, that is currently before them.
“The judiciary needs to stop Buhari if the country must move forward. The justices can rescue Nigeria from Buhari and stop it from collapsing.
“We assure Nigerians that true independence will come to them and the country under a better administration, and not under Buhari administration.”
Top Stories