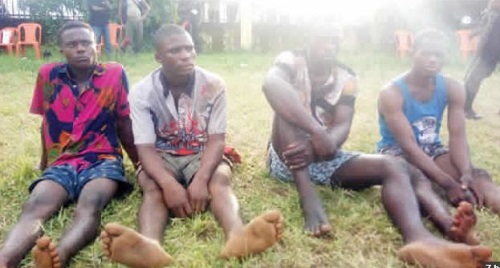 The police in Imo State have arrested four suspected armed robbers said to specialise in robbing people in the Mbaitoli Local Government Area of the state.

The state Commissioner of Police, Rabiu Ladodo, who paraded the suspects, said they were arrested by the operatives of the Anti-kidnapping Unit of the command.

The CP, who gave the names of the suspects as, Victory Oke, 19; Promise Mbata, 21; Timothy Achugwo, 20; and Leonard Onyekachi, 23, said they would be charged at the conclusion of investigation.

Ladodo stated, “On June 13, 2019, these suspects invaded the house of one Kingsley Umejuru of Okwu Ogbaku in the Mbaitoli Local Government Area, armed with guns and machetes. They shot indiscriminately and scared the occupants of the house and others in the vicinity.

“They broke into the house and carted away household equipment. On investigation after the receipt of the information, the operatives of the Anti-kidnapping Unit swung into action and upon credible intelligence arrested the hoodlums in their hideouts and recovered the stolen items from them.

“They will be charged at the end of investigation. We are working towards ensuring that justice is served. I, therefore, appeal to every member of the community to keep cooperating with the police in the fight against crime in the state.”
Top Stories