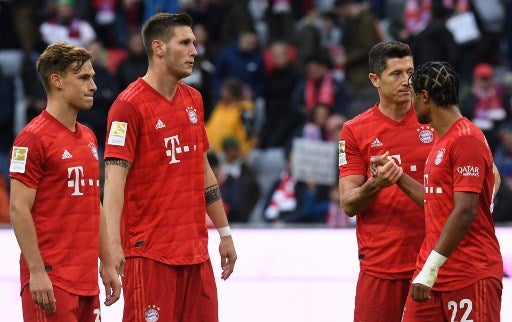 Four days after thrashing Tottenham in Europe, Bayern Munich suffered their first loss of the season on Saturday with a shock 2-1 home defeat by Hoffenheim in the Bundesliga.

Second-half goals by striker Sargis Adamyan sealed a first-ever win at Bayern for Hoffenheim as Niko Kovac’s side crashed back down to earth following Tuesday’s 7-2 Champions League rout of Spurs.

Bayern keeps first place in the table only on goal difference ahead of RB Leipzig, Freiburg, Schalke and Bayer Leverkusen, with the top five teams all on 14 points.

Borussia Moenchengladbach, who are sixth, can finish the weekend top if they beat Augsburg at home on Sunday.

“We didn’t manage to repeat the good performance we had on Tuesday,” admitted Kovac.

“After the break, we made too many mistakes and were never able to put pressure on them. Hoffenheim’s victory is not undeserved.”

Bayern captain Manuel Neuer said the defeat served as “a warning you get nothing for free”.

It was Bayern’s first home league defeat for almost a year.

Robert Lewandowski equalised with his 11th Bundesliga goal this season, scoring for the seventh straight league game before Adamyan clinched the win with his second late on to stun the Allianz Arena.

After Hoffenheim right-back Stefan Posch wasted a chance, Lewandowski equalised on 73 minutes with a towering header.

However, Adamyan fired through the legs of Bayern defender Jerome Boateng, as he had also done for the first goal, to seal the surprise win 11 minutes from time.