A final year Nigerian university student has been reportedly swept away by a raging flood in Ondo state. 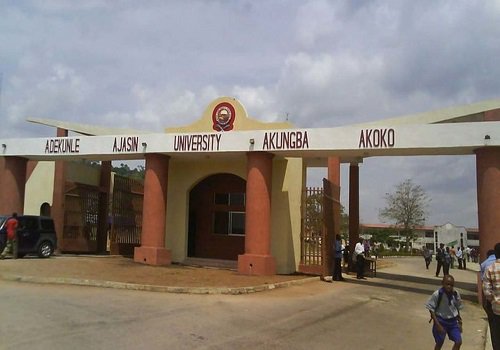 File photo
According to The Nation, an eight-hour torrential rainfall in Ondo State has claimed the life of a final year student of Adekunle Ajasin University, Akungba, in Akoko Southwest Local Government Area of the state.

Also, many residents of Ado Ekiti, the state capital, have been thrown into utter misery and confusion as a downpour that lasted about 11 hours wreaked havoc on different parts of the metropolis.
Sources said the deceased student simply identified as Doyin, who was also an indigene of Ekiti State, was dragged away to an unknown destination by the heavy flood from a canal very close to her residence in Akungba town.

The downpour in Ado-Ekiti, which began around 2:45pm on Monday and lasted until 12:15pm on Tuesday, rendered many homeless and destroyed valuables worth several millions of naira.

Many residents of the state capital could not go about their daily business as a result of flood that accompanied the heavy rainfall.

The development led to hours of gridlock on the ever-busy Ado-Ijan-Ikare Akoko as Ureje bridge was completely submerged.

Many motorists coming into Ado Ekiti were held within the highways as they had to wait for the water level to recede before they could use the road.

The torrential rain forced many residents to stay indoors, while others, who took the risk to leave their houses, got stuck.

An artificial border was created because motorists conveying passengers to either Ijan Ekiti/ABUAD/ Federal poly or Ado Ekiti discharged their passengers for the vehicles at the other end and returned to base.

The water level on the major roads was knee-high as pedestrians struggled to wade through the flood.

The Nation gathered that the flood swept many vehicles, several meters away from where they were parked and they were waterlogged.

At different affected areas visited by our correspondents, residents were seen trying to evacuate water from their apartments and shops while counting their losses.

A victim, Mr. Omoboriowo Abdullateef, disclosed that all what he had painstakingly laboured for over many years had been lost.

Another victim, Jegede Michael, whose residence was flooded for the second time, said his properties were washed off, including vital documents, by the ravaging flood.

They, however, appealed to the governments and public-spirited individuals to come to their aid, saying the degree of damage done was beyond their individual capabilities.

The landlord of the missing student in Ondo, Elemukona Ademola, who narrowly escaped the raging flood, said: “I have to climb cocoa tree, when many people thought I had been carried away by the flood.”

The landlord said he had made many efforts to curtail the erosion from the canal.

At the scene of the incident, the Ondo State Commissioner for Agriculture, who is also an indigene of the town, Otunba Gboyega Adefarati, paid a sympathy visit to the area.

He warned his kinsmen against building houses very close to the canal.

Adefarati equally cautioned those in the habit of blocking the drainages with refuse to desist from such act, as this practice always leads to flooding.

Already, the AAUA authorities have suspended lectures and tests earlier scheduled for yesterday over the incident.

A statement signed by the Institution’s Acting Registrar, Opeolu Akinfemiwa, however, said all students should resume today.

According to him, “The University is leaving no stone unturned in the quest to find the missing student.

“Divers and other volunteers have been sought to search the path of the river in a bid to find the missing under graduate.”

The Divisional Police Officer (DPO) in charge of Akungba, Shakiru Ajibola, a Chief Superintendent of Police (CSP), confirmed the incident and said three persons, including a landlord of the house where the girl was carried away by flood, were rescued.

He noted that divers were still searching for the missing undergraduate in the rivers around the area.

Already, many roads in Akokoland have become impassable as serious erosion has affected them, especially Jubilee road, Hospital junction, Bankole road, Ilepa, Ikare, Okoja Awara road, Irun to Ojeka, Irun to Surulere to Oluta and Okeagbe to Afin to Eshe.

Two farmers, Bayo Boluwade and Alhaj Adebola Sarumi, who are farmers, appealed to government to shift emphasis from urban roads to rural roads in the state to improve the economy.
Top Stories