#SexForGrades: Our Lecturers Have Comfortable Sofas In Their Offices - UNILAG Student Reveals


A student of the University of Lagos has spoken up about the #SexForGrades scandal rocking the popular academic institutions. 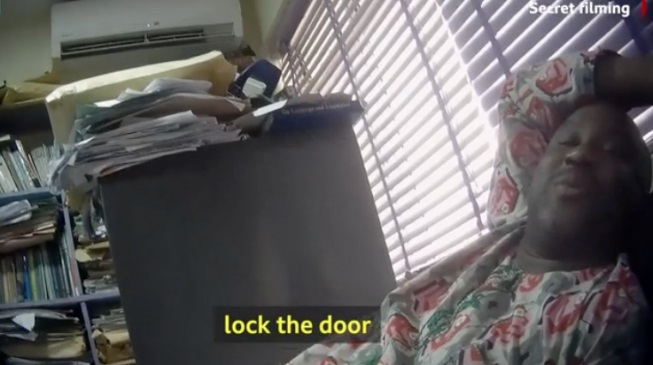 Dr Boniface, one of the indicted lecturers
According to TheCable, a student of the University of Lagos (UNILAG) says many lecturers have “comfortable sofas” in their offices.

Speaking on the s*x for grades scandal rocking the institution, she said s*xual harassment is no news on the campus.

Boniface Igbeneghu, a lecturer of the University of Lagos, has been in the news for s*xually harassing an undercover journalist who posed as an admission seeker.

The senior lecturer, who is also pastor of a Foursquare Gospel Church, was exposed in a documentary released by the BBC Africa Eye on Monday.

In the documentary, Igbeneghu narrated how he and some of his colleagues patronise the UNILAG Staff club “cold room” to commit several sexual atrocities with female students.

The student, who craved anonymity for the fear of being punished by her lecturers, said many senior lecturers engage less in lecturing because there are situations when more than one lecturer take a course.

She accused some of them of using the time expected to be used for research and community service for meeting with students for sexual gains.

“I have heard of a lot of cases of sexual harassment. It’s no news on campus. It is a normal thing,” she told TheCable.

“One of our lecturers will invite female students over and tell them to come in the evening to do things that are 18+… they do it in their offices. Time is not a barrier, but most times it is around 6pm. The lecturers have comfortable sofas in their offices. The sofas are really long, three-seater in some of the offices.”

She also narrated an instance of sexual harassment during her conversation with TheCable.

“There was a time a friend of mine did a group work. They were unable to submit the group work because the lecturer wanted a lady, who is a member of the group, to submit the work so she can see him,” she said.

“But the ladies in the group objected and told others that they would have to forfeit the mark and pray hard to pass the course.”

She added that students who are victims of sexual harassment are scared to speak up.

“Everybody is scared to speak up. If such happens to me, I don’t know if I will come out to say anything,” she said.

“That is the truth. The problem is that it is not safe to speak to school authorities because you don’t know who is who.”

The school authorities have since suspended the lecturers indicted in the BBC report while the “cold room” where some of the atrocities took place have been shut.

When TheCable visited the “cold room” on Tuesday, a security official refused to allow the reporter in.

The reporter also observed that the office of  Igbeneghu at department of linguistics in the faculty of arts was locked.

When contacted, Taiwo Oloyode, a spokesperson of the institution, told TheCable to send a text message because she was in a meeting.

She had not replied the text message as of the time this report was filed.
Top Stories