Oh No! Missing Cargo Plane Crashes Inside Forest, Killing Presidential Staff On Board


A cargo plane which went missing from the radar has crashed inside a forest killing everyone on board. 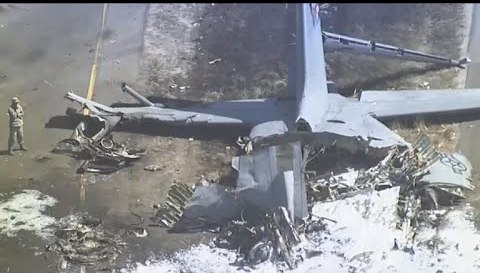 The plane, carrying President Felix Tshisekedi’s driver, a logistics manager and some soldiers, was headed for the capital Kinshasa and went off radar on Thursday afternoon, an hour after departing, a statement from the civil aviation authority said.

It crashed in a forest in Maniema and broke up upon landing.

“There are no survivors. The bodies were all burnt to ashes,” said advisor Vidiye Tshimanga.

The cause of the accident was not yet clear.
Local media showed a crowd of hundreds of Tshisekedi supporters hitting the streets of Kinshasa after the news broke on Friday morning, fearing that the plane crash had been some kind of failed coup attempt against Tshisekedi. The president took over from long-standing former President Joseph Kabila this year.

No information immediately backed up such a claim.
Top Stories