He ultimately decided to stay put, with the five-time Ballon d'Or winner remaining a one-club man to this point. 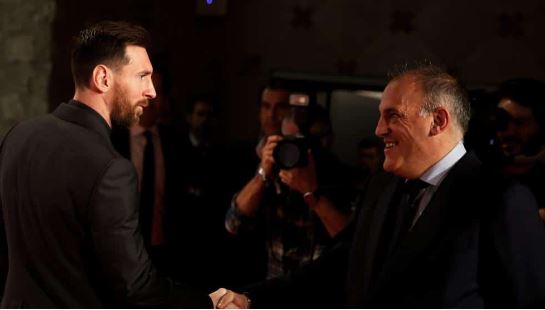 Lionel Messi, Javier Tebas.
Lionel Messi’s revelation that he considered leaving Barcelona in 2013, “scared” LaLiga president Javier Tebas.
Messi said he contemplated making a move, after becoming caught up in a tax avoidance case.
He ultimately decided to stay put, with the five-time Ballon d’Or winner remaining a one-club man to this point.
That is a relief to Tebas, who admits losing such an iconic presence, would have been unthinkable for the Spanish top-flight.
He told reporters at Cirque du Soleil’s Messi-inspired show: “We were never scared [that Messi would leave Spain] because we didn’t know what he was thinking.
“With [this week’s] interview, I got scared and [then] I was relieved to see that, just as well, he decided to stay. In this low moment, he decided to continue.
“I want to thank Messi for continuing in our league. If he feels down again, he shouldn’t have any doubts that we will support him and call him, that we will keep supporting him.”
Tebas believes Messi was unfairly treated when faced with tax fraud allegations and can sympathise with the Barcelona superstar.
He added: “I don’t think there was cruelty, but they were unfair with him as a physical person.
“It’s clear that he didn’t sign or didn’t read everything. They would tell him where to sign and he would do it.
“I don’t read all the La Liga contracts otherwise I’d be there all day.
“I’m convinced that it was an administrative issue and not criminal.”
Top Stories