The teenager is already making an impact in his homeland and has been watched by scouts from the Old Trafford outfit. 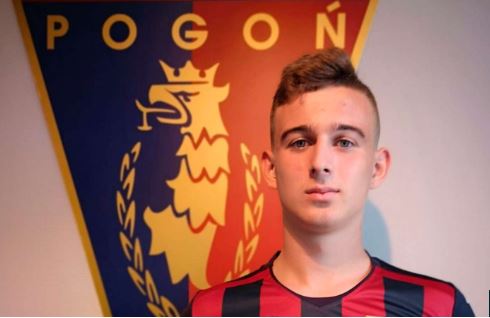 Kacper Kozlowski
Manchester United are tracking the progress of 15-year-old Polish wonderkid Kacper Kozlowski as they aim to further boost their academy ranks.
Kozlowski has already made his senior debut for Pogon Szczecin, who are currently top of the Ekstraklasa (the Polish top-flight), and any move would be subject to a clear development plan for him to reach the first-team at Old Trafford.
Goal has learned that clubs from Italy, Germany and France have also shown an interest in the teenager, who is widely regarded as one of the top talents in Polish football.
He spent much of last season playing for Pogon II in the fourth division but was called up to the senior side towards the end of the campaign, making his first-team bow at the age of 15 years and 215 days in a match against Cracovia Krakow.
He has remained part of manager Kosta Runjaic's squad for the current campaign, and has twice been called upon off the bench when Pogon have been chasing results as they look to win a first Polish league title.
Their success this term has been built on strong investment in their academy structure, with Kozlowski - who has a penchant for long-range strikes - a glowing example of how it is paying off.
United scouts, along with representatives from a host of other Premier League sides, recently watched Kozlowski as he represented Poland at UEFA's Under-17 Syrenka Cup against England. Kozlowski scored in the 2-2 draw, though England went on to win on penalties.
He recently extended his contract with Pogon to run until June 2022, but the financial might of clubs from the big-five European leagues may prove enough for him to be moved on.
While United are always on the search for the game's next great young talent, their struggles so far this season mean reinforcements for the first-team are also required.
Tottenham midfielder Christian Eriksen and Juventus forward Mario Mandzukic are among their main transfer targets ahead of the January transfer window as Ole Gunnar Solskjaer aims to improve a squad that is currently sat 12th in the Premier League table after eight matches.
United have also recently enquired about another midfielder in Rostov's Mathias Normann, but they face competition from Spurs and Sevilla.
Solskjaer has been criticised for putting together a squad that lacks depth, with a summer of more sales than signings and a host of injuries having seen them lean on youngsters more than the Norwegian may have liked in the early weeks of the campaign.
The likes of Paul Pogba, Anthony Martial, Aaron Wan-Bissaka and Luke Shaw have faced lengthy spells on the sidelines, though there is hope that some may be fit to return to face Liverpool on October 20 when domestic action resumes following the international break.
Top Stories