Aisha Buhari Reveals What Kept Her In The UK For Months


Aisha Buhari has opened up on why she traveled to the UK and stayed there for months. 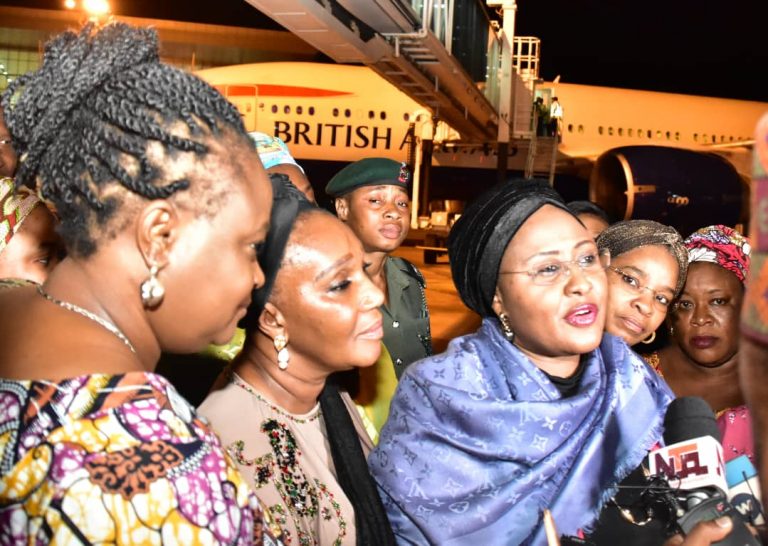 Aisha Buhari answering questions yesterday
Aisha Buhari, wife of Nigeria's President Muhammadu Buhari has revealed that her long stay in the UK was as a result of “doctor’s instruction.”
She made the revelation on Sunday in an interview she granted journalists shortly after she arrived at the Nnamdi Azikiwe International Airport, Abuja in the early hours of Sunday.
Although she said she was well, the President’s wife said she still needed more rest.
She said, “I have taken my holiday for this year and it happened that after the holiday, I needed to attend to my health before going to Saudi.
“When I went to Saudi, based on doctor’s instruction, I went back to the UK.
“I am well now but still, I need more rest.”
Mrs Buhari confirmed the authenticity of a video that went viral recently which showed her expressing anger at a development in the Presidential Villa.
She however said it was an old video.
She cautioned Nigerians against the scourge of fake news, which she said does no good to anyone.
With her return, she promised to devote more energy to improving the welfare of women and children.
She thanked Nigerians for what she called their constant prayers for her and President Muhammadu Buhari.
Her spokesman, Suleiman Haruna, later issued a statement quoting her as saying that she was happy to be back in the country after what she called a “deserved rest.”
The statement read, “This morning, First Lady of Nigeria, Mrs Aisha Muhammadu Buhari, returned to the country after a long holiday in the UK.
“She arrived at the Nnamdi Azikiwe International Airport at 4.30am via a British Airways flight.
“Speaking to reporters on arrival, Mrs Buhari said she was happy to be home after a well-deserved rest.
“She confirmed that she was fully rejuvenated to continue the work of improving the health and well-being of women, children and other vulnerable Nigerians.
“She used the opportunity to thank her husband, family and well-wishers for their support and encouragement.
“On hand to receive her were wives of present and former governors and many associates.”
Meanwhile, the Enugu State chapter of the All Progressives Congress on Sunday said the return of Mrs Buhari back to the country had put ‘full stop to fake news.’
The state Publicity Secretary of the APC, Mrs Kate Ofor, said Mrs Buhari’s return had put paid to fake news even as she welcomed her return back to Nigeria.
“I wholeheartedly welcome our dear First Lady back to the country. Her elegant return has put full stop to fake news which dominated our public domain. I think we have to not only find legitimate means to curb fake news, but also come to terms that social media have no gatekeeper. Therefore, we must cultivate the culture of sieving the genuine from fake news.”
Top Stories