Frodd lighted up the internet when he was seen pecking mother of one, Juliet Ibrahim at a public gathering. 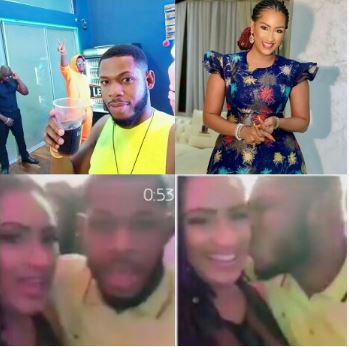 The internet has been thrown into a frenzy since yesterday afternoon after a video of Big Brother Naija star, Frodd was seen getting romantic with Juliet Ibrahim.

Many believe Juliet Ibrahim might be feeling something for the 28-year old young man from Anambra.

Recall that months back, the stunning screen goddess made a public broadcast that she is seeking a boyfriend like Big Brother Naija housemate, Frodd after watching footage of the young man washing the underwear of Esther, his love interest.

In videos she posted on her Insta Story months back, the 33-year-old Ibrahim, who reportedly had not been that lucky with love, disclosed that she wants her own Frodd in a joking manner.