He was suspended on Friday, Oct. 18, 2019 at the state secretariat of the party located in Airport road area of the state. 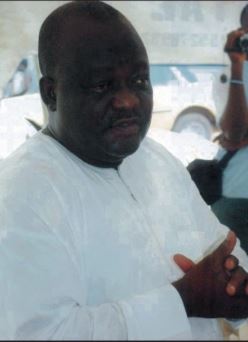 Secretary of the Edo State chapter of All Progressives Congress (APC), Engr. Lawrence Okah, has been suspended from office.

He was suspended on Friday, Oct. 18, 2019 at the state secretariat of the party located in Airport road area of the state.

Although, his suspension was carried out by the State Chairman, Anselm Ojezua and members of the State Working Committee, a reporter however, learnt from credible source that it was orchestrated by the Governor, Godwin Obaseki.

Ojezua is a well known supporter of the state Governor, who has never hidden his stand since the crisis rocking the Edo state APC started. Okah on the other hand, is a supporter of the National Chairman of the party, Adams Oshiomhole. He fell out of favour with Obaseki during the 2019 general elections in the state.

He was accused of working against the Governor's choice of candidates, while standing firm with the choice of the “Abuja politicians” during the party's primaries.

Okah is said to have also refused to pledge allegiance to the Governor, denying him a second term endorsement using the state APC.

Both Oshiomhole and Obaseki have been at loggerhead since the controversial Edo Assembly inauguration, with the latter accusing the former of scheming to deny him second term ticket - a claim he has since denied.

When contacted, the embattled secretary confirmed his suspension to Igbere TV, but said the state chairman, going by the party's Constitution, had no power to suspend him.

In a subsequent statement made available to reporters on Friday, Okah maintained his earlier position, saying he remains the secretary of the Edo state APC.

“My purported suspension as Secretary of APC in Edo State is illegal and cannot stand”, he said.

“Governor Godwin Obaseki and Anslem Ojezua lack the powers to suspend me. All they have done so far regarding the party is illegal and cannot stand.

“I remain the secretary of the party while Comrade Adams Oshiomhole remains the leader of the party in Edo State”, Okah maintained.

This is not the first time the governor will be sacking Edo APC members. In September, Obaseki sacked over 260 appointees in an exercise aimed at weeding out non-loyalists out of his government ahead next year’s governorship election.

Just this week, Governor Obaseki ordered the sack of all political appointees in the eighteen local government councils of the state, even as rumours are rife that the wave of sack and suspension may hit more political heavyweights.