He alleged that the N17.5 billion was illegally withdrawn on the order of Gov. Seriake Dickson to prosecute the Nov. 16 governorship election in the state. 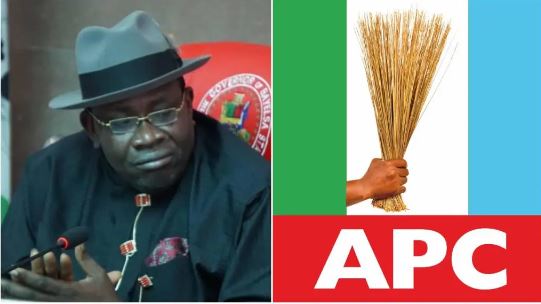 The All Progressives Congress (APC) has called on the Economic and Financial Crimes Commission (EFCC) to investigate an alleged diversion of N17.5 billion by the Bayelsa State Government.

Mr. Yekini Nabena, the APC Deputy National Publicity Secretary, made the call in a statement issued on Sunday in Abuja.

Nabena also urged the EFCC and the Nigerian Financial Intelligence Unit (NFIU) to investigate all the bank accounts belonging to the state government.

He alleged that the N17.5 billion was illegally withdrawn on the order of Gov. Seriake Dickson to prosecute the Nov. 16 governorship election in the state.

According to him, the anti-corruption agencies should track down the N17.5 billion allegedly withdrawn by the state government and arrest the Commissioner for Finance, Mr Maxwell Ebibai, who, he claimed, facilitated the withdrawals.

Nabena said: “In the last two weeks, the Bayelsa State Government has, in highly suspicious circumstances, made several withdrawals to the tune of N17.5 billion without any corresponding project to justify such withdrawals.

“The insider reports we received stated that Gov. Seriake Dickson approved the illegal withdrawals to fund the election of the People’s Democratic Party (PDP) governorship candidate in the state.

“The EFCC and the NFIU must urgently freeze the state government accounts to stop further illegal withdrawals.

“The anti-graft agencies must also track down the already withdrawn N17.5 billion and arrest the state Commissioner for Finance, Mr Maxwell Ebibai, who oversaw the illegal withdrawals.

“Our sources reported that some of the cash are stashed in the governor’s Toru-Orua country home.

“Others have been laundered by the commissioner through the Bayelsa Development and Investment Corporation (BDIC).

“It is now clear that Gov. Dickson is using the federal allocation meant for the people of Bayelsa to fund the election of PDP governorship candidate,” he alleged.
Top Stories