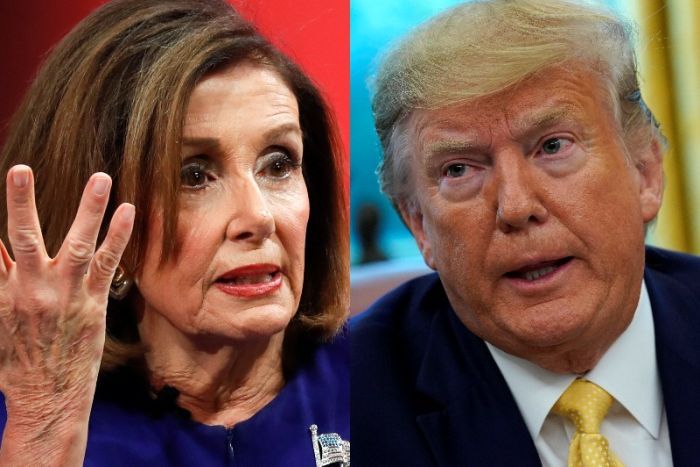 Speaker Nancy Pelosi and President Donald Trump
US Speaker Nancy Pelosi has released a “fact sheet” laying out the most compelling evidence against President Trump in their investigation of the president’s efforts to pressure the Ukrainian government to investigate the Bidens.
“President Trump has betrayed his oath of office, betrayed our national security and betrayed the integrity of our elections for his own personal political gain,” the document states in laying out how Democrats are likely to try to make their case in the impeachment inquiry.
The four-page document divides the narrative into three categories: the “shakedown,” “the pressure campaign” and “the cover up.”
The document first cites the rough transcript released by the White House last month of the July 25 call between Trump and Ukrainian President Volodymyr Zelensky. In that call, Trump told Zelensky that he would have his personal lawyer, Rudy Giuliani, and Attorney General William Barr reach out to “get to the bottom” of “a lot of talk” about the business dealings of former Vice President Joe Biden’s son Hunter Biden.
The fact sheet then cites text messages that former Ukraine envoy Kurt Volker provided to the House committees leading the impeachment inquiry that show discussion between diplomats about the Trump administration’s efforts to push for the investigation as evidence of a “pressure campaign.”

In one of those exchanges, William Taylor, the chargé d’affaires for Ukraine, said “I think it’s crazy to withhold security assistance for help with a political campaign.”
Taylor is slated to appear for testimony before the House committees on Tuesday.
The document from Pelosi then concludes that the intelligence community whistleblower complaint that sparked the impeachment inquiry details evidence of a “cover up” by White House officials to “lock down” records of the July 25 call between Trump and Zelensky by transferring the transcript to a separate electronic system used to handle particularly sensitive classified information.
Pelosi initially balked for months at an impeachment inquiry in the House, but formally announced the investigation following the whistleblower complaint about Trump’s dealings with Zelensky and the White House’s release of the partial transcript of the call.
-NAN
Top Stories