Lagos Student Goes Blind After Being Flogged By His Teacher (Photo)


A student is seeking for help after going blind because of the flogging he received from his teacher. 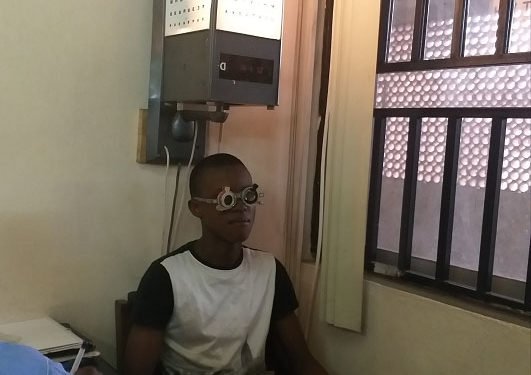 Daniel Agboola
Daniel Agboola, a Senior Secondary School (SS) Two pupil of Camp David Group of Schools in Ogba, Lagos State, who claimed his teacher Mr. Oludare Olaleye damaged his right eye while flogging him on March 29, may lose his sight if help is not found quickly.
The Nation gathered that after the flogging he developed cataract and glaucoma. He had a cataract operation on May 28 at the Lagos State University Teaching Hospital (LASUTH), paid for by the school, but he is now battling with glaucoma and still going for check-ups. His family says they have no more money for further treatment.
The incident happened during an exam period in the school, as reported in The Nation on May 4.
Olaleye was dragged to an Ikeja Magistrates’ Court on July 22, for inflicting an injury on his pupil.
The Chief Magistrate, Mrs Olufunke Sule-Amzat granted the teacher N50,000 bail and adjourned the case till October 21 (yesterday). But the court did not sit yesterday, and the case was further adjourned to December 2.
A physician that attended to Agboola at LASUTH explained that he had both cataracts and glaucoma.
He said it was possible that the cataract and glaucoma might have resulted from the cane which went into his eyes.
He said the cataract surgery was successful.
The doctor explained that Agboola had to strictly adhere to taking the new eyedrops to avoid total blindness.
“His eye pressure used to be 45, it reduced to 40 and now his right eye pressure is 35 while the left is 20. He cannot be operated on for glaucoma now because he has high eye pressure; all he can do is to continue using the new eye drops that have been prescribed for him to lower the eye pressure.
“The state of the eyes by his next appointment will determine if he will undergo surgery or not.”  The doctor told him to go for a fraction and eyeglasses.
Agboola said the eyes got a little clearer after the operation, though he cannot read.
He said he has not been to school since March 29, lamenting that it was painful to miss an academic session.
“I want my eyes intact; the doctor said my left eye is getting affected too. I am supposed to be in SS3 but now I have to remain in SS2,” he said.
His mother Mrs Agboola said she does not have money to further the eyes’ treatment.
She said, “At the last hospital appointment, I could not buy the eyedrop recommended or get the eyeglasses because I had no money. I borrowed money from everybody that I know to treat Daniel and I don’t know how to pay back. I am no longer hearing from the school or the Lagos State government, who initially intervened on the matter. I wonder why my son and I are being made to suffer this much from what we had no hand in.
“I have been moving in and out of the State Secretariat, police station and LASUTH since March 29. At every check-up, which is twice a month, I spend about N20,000, which covers eye pressure tests, payment for clinic day, transportation and eyedrops among other things. Sometimes I missed the appointment if I don’t have money. This suffering is too much.  I would prefer this operation to be done at Eye Foundation, because when the whole problem started and my son was taken to Eye Foundation, they said that he would be operated for glaucoma; may be if I had insisted then that the operation would be done in Eye Foundation, all these would have been a thing of the past and my sons’ eye would have been corrected.
“It was the government that said the operation should be done at LASUTH for record purposes and I guess because it was cheap. LASUTH costs N45,000 but Eye Foundation then said they would collect N1.5 million.
“I need help; I don’t know where to get money; all I want is his eye restored to normal. I need the government to help me; I need help from well-meaning Nigerians and everybody. I need Governor Babajide Sanwo-Olu to help me, on how my son’s eye will be restored.
For assistance, payment can be made to GT Bank with account number 0448788086.
Culled from TheNation
Top Stories