Two players have collapsed after being struck by thunder during a match over the weekend. 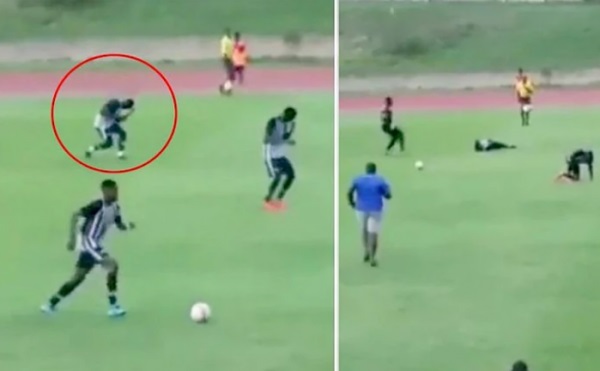 Thunder strikes two footballers
Two young footballers have been struck down by lightning (Thunder bolt) during a football match in Jamaica over the weekend.
It was gathered that Wolmer’s Boys’ School were in action against Jamaica College at the Stadium East field in Kingston when the footballers collapsed.
Loop News reports that Wolmer’s were leading 2-1 in the second half when the bolt hit that caused four players to fall to the floor.
JC player Terrence Francis and Wolmer player Dwayne Allen were both rushed to University Hospital in West Indies for observation.
According to local outlets, Francis was stretchered off the field after he failed to respond to treatment and another of his teammates Nickache Murray was later admitted after “complaining of chest pains”.
The Jamaica Gleaner added that he was held overnight after The Inter-Secondary Schools Association said tests were done and “ECG showed irregularities.”
The ISSA later revealed that Allen has since been discharged from hospital while Francis has shown “significant improvement,” and is now in a stable condition.
Ian Forbes, team manager of Jamaica College, told the Jamaica Observer that Murray has now been discharged.
Footage of the shocking incident is now doing the rounds on social media which shows two players drop and clutch their heads after lightning strikes.
Watch video below:
Top Stories