Nnamdi Kanu Speaks On Returning To Nigeria For His Mother's Burial


Nnamdi Kanu has revealed the decision he has taken whether or not to comeback to Nigeria to bury his mother. 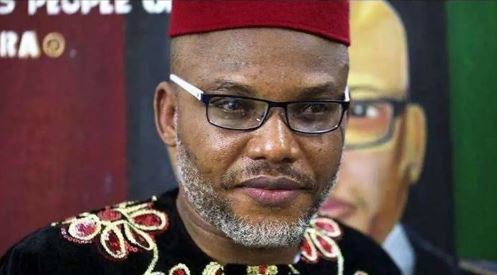 IPOB Leader, Nnamdi Kanu
Leader of the Indigenous People of Biafra, IPOB, Nnamdi Kanu has revealed the decision he has taken whether to return to Nigeria or not following death of his mother.
Recall that Nnamdi Kanu lost his mother in August 2019 but only announced her demise recently.
He accused the Nigerian Military of being behind her death, claiming she was traumatized by the Military’s “Operation Python Dance” that led to the deaths of several members of the group.
Below are excerpts from Kanu’s Interview with Voice of America;
VOA: Recently some Monarchs petitioned the Government to allow you come back and give your mother a befitting burial. What is your stance on that?
Kanu: My mother died as a result of the agitation for Biafra. I have not asked anyone to lobby for me to return to bury my mother. I am not interested in coming back to bury my mother if that will entail killings, disappearance and extra-judicial torture of our people. I will not do anything to jeopardize the lives of our people for the sake of burial. Whether I’m there or not, my mother will be buried.
VOA: Some of your critics say you are seeking the disintegration of Nigeria and this unacceptable because it questions the territorial integrity of Nigeria
Kanu: The question is who created Nigeria? Nigerians did not create Nigeria, the British did. We keep forgetting that Nigeria is just artificial creation. There was nothing called Nigeria before the British came. What we are asking is to return as we were before the white man came. The name Nigeria does not mean anything. It is only a pet that you give a name and it will answer without question. By accepting that name Nigeria, what we are saying is that we are incapable of creating a civilised society by ourselves.
Top Stories