The Nigeria Customs Service has announced the seizure of 34 containers of rice smuggled through the Tin Can Island port. 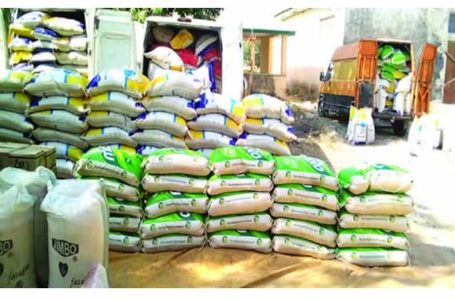 The Nigeria Customs Service has announced the seizure of 34 containers of rice smuggled through the Tin Can Island port.

The Comptroller General of Customs, Hameed Ali (retd), disclosed this in Lagos on Tuesday.

One container of rice was concealed with spare parts, he disclosed further.

Ali put the Duty Paid Value of the seized goods at N2.7bn.

He attributed the seizure to the recent closure of the land borders which according to him had prompted importers of banned items to route them through the seaports.

He said, “Specifically we are aware that the partial closure of the land borders has resulted in the diversion of some cargoes back to our seaports.

“While we welcome this development which no doubt will boost revenue, improve our trade facts and figures and sustain our diversification efforts, we have also recorded a number of seizures of unwholesome products which otherwise would have been smuggled through the borders.

“Realising that there may be a possible backlash to the closure of the land borders, I directed all seaports and airports to beef up surveillance and intercept any illicit and prohibited consignment for which attempt for their smuggling may be made through these entry points.

“This decision was made considering that those consignments may have been paid for and the importers will devise entry means to ensure they are delivered to their warehouses in Nigeria.”

Our correspondent gathered that the consignment of rice originated from Thailand.

Ali added that some of the rice had expired while others were about to expire.

Rice importation, both through the sea and land is prohibited.

The Central Bank of Nigeria has not issued Form M since 2015 for the importation of rice through the seaport, therefore any foreign rice in the country is smuggled, the Customs CG said.

Ali said he had directed a full investigation to bring all those connected with the importation to justice.

Commending the Tin Can Island Command of the Customs, Ali said N286.7bn had been generated as revenue by the Command from January to date.