The opposition party has revealed that with the evidence at the disposal of its presidential candidate, Atiku Abubakar, win at the Supreme Court is assured. 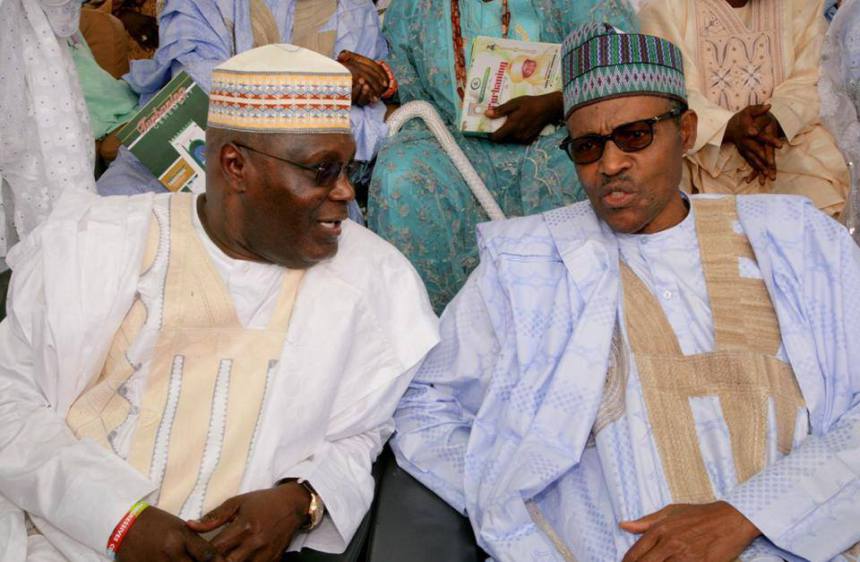 Atiku Abubakar and Muhammadu Buhari
The Peoples Democratic Party (PDP) has said there is no way the All Progressives Congress (APC) can escape justice at the Supreme Court, given the weight of evidence proving that its presidential candidate, Atiku Abubakar, won the February Presidential election.
According to DailyPost, PDP warned the ruling party and supporters of President Muhammadu Buhari to desist from their “blackmails and irresponsible allegations against it and Atiku, as such can never sway the Supreme Court to alter the course in the matter.”
A statement by PDP’s spokesperson, Kola Ologbondiyan said: “APC, being discomfited by the weight of evidence against it and President Buhari, has resorted to cooked-up stories, inventions and threats, in a bid to smokescreen its machinations against the Supreme Court; all characteristic of individuals desperate to distract the court.
“Our party has built a solid case at the Supreme Court. It stands with Nigerians across the country in believing that Justice will prevail. On the other hand, the APC, seeing that it has no hope, has been devising all manner of shenanigans to overheat the system so as to create the ground to derail the course of justice.
“Nigerians are aware of how chaotic the APC has been since the PDP and Atiku Abubakar succeeded in assembling our undisputable evidence before the Supreme Court, including the clear miscarriage of Justice in the judgment of the Presidential Election Petitions Tribunal (PEPT), which even the tribunal admitted was full of errors.
“Nigerians are also aware how the APC plots to frustrate and irritate the Supreme Court by filing a cross appeal seeking to direct the apex court on what to do with the critically flawed judgment of the tribunal.
“Unfortunately for the APC and the Buhari Presidency, all the flaws in the judgment of the tribunal are bare before Nigerians; they are now before the Supreme Court and the APC cannot escape justice.
“We, therefore, refuse to be drawn into a dance in the mud with the unsettled APC, which is reputed as a party of schemers, blackmailers, manipulators, scammers, coercers, powermongers, certificate forgers and desperate individuals whose desire is to cause confusion, blackmail the Supreme Court and disrupt the trajectory of justice in this case.”
Top Stories