A Sexual Harassment Policy Document has been presented by the University of Port Harcourt to fight sexual harassment. 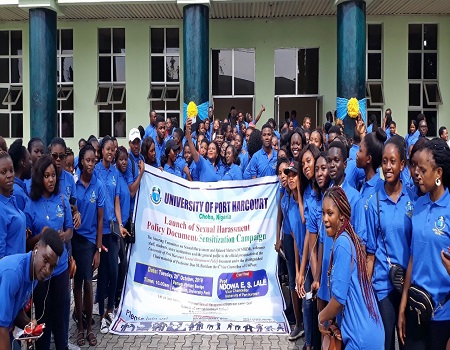 According to NAN, the Federal Government is embarrassed by increased allegations of sexual misconduct in the country’s tertiary institutions, the Minister of Education, Mallam Adamu Adamu, has said.

Adamu made the remark at the formal presentation of Sexual Harassment Policy Document by the University of Port Harcourt (UNIPORT) in Port Harcourt on Tuesday.

The unveiling of the document followed the recent British Broadcasting Corporation (BBC) sex-for-grades investigation report on some African universities.

“The Federal Ministry of Education is embarrassed with the allegations of sex-for-grades in Nigeria’s higher institutions.

“Girls should read their books and be able to defend their certificates and as such, make them less vulnerable to sexual predators.

“They (female students) should stop going to lecturers unnecessarily and also should not harass their lecturers,” he said.

The minister said that UNIPORT was the first university in the country to unveil a policy document against sexual harassment on campus.

According to him, the policy will go a long way in addressing the danger of sexual harassment in institutions of learning.

The Vice-Chancellor of UNIPORT, Prof. Ndowa Lale, said the university frowned at sexual misconduct and was taking actionable steps to tackle the menace.

He said the document defined the rules of engagement between lecturers, administrators and students, including visitors to the university.

“The document unambiguously defines what constitutes sexual harassment and the sanctions to be taken against those who wittingly and unwittingly infringe on its provisions in the line of duty.

“Henceforth, lecturers and administrators who do not remember to sew zippers in front of their trousers should be ready to bear the consequences of their amorous liaison with female students.

“Also, students who harass lecturers to award them undeserved grades should equally be ready to face the music if and when they are caught in the act of self-advertisement to their lecturers.

“Similarly, any randy Juliet (female student) who blackmail vulnerable male students or colleagues, and any visitor who believes that UNIPORT is the hunting ground for cheap sex would be prosecuted,” he warned.

Lale said that any person accused of sexual misconduct would be presumed guilty until such allegation was proved otherwise, under the established rules of fair hearing.

Prof. Nwadiuto Akani of the Department of Paediatrics, UNIPORT, said that sexual misconduct started with a lecturer or student addressing themselves by names, such as baby, honey and darling.

She said that gestures, such as hugging; blowing kissing sound, touching of the body and sending unsolicited messages, constitutes sexual harassment.

The News Agency of Nigeria (NAN) reports that female students went into wild jubilation following the unveiling of the document on campus.