Akpoti was a governorship candidate but was disqualified by the electoral commission over an invalid nomination of her running mate. 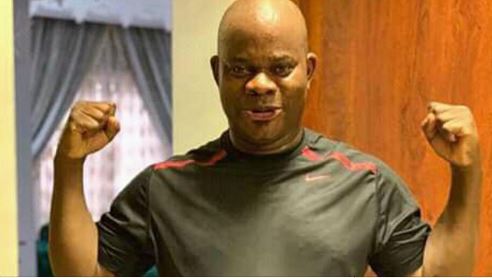 The Independent National Electoral Commission (INEC) says it cannot disqualify Yahaya Bello, governor of Kogi state, for double registration because it is not an offence under the electoral act.

Mahmood Yakubu, INEC chairman, made this known while speaking at a quarterly media meeting with journalists on Wednesday.

Natasha Akpoti, a member of the Social Democratic Party (SDP), had asked a federal high court in Abuja to disqualify the governor from the November 16 gubernatorial election over alleged double registration as a voter.

Akpoti was a governorship candidate but was disqualified by the electoral commission over an invalid nomination of her running mate.

In the suit, Akpoti said Bello allegedly committed the offence of double registration on May 23, 2017, at the government house in Lokoja after he had reportedly registered as a voter in Abuja in 2011.

But reacting, Yakubu also said the commission cannot prosecute the governor, who is seeking a second term in office, because he enjoys constitutional immunity.

“We disciplined our staff that were involved because it is within our reach to take administrative action against them. Moreover, the electoral act does not permit us to disqualify anyone based on the account of double registration.

“This is our handicap.”

Speaking on the allegation that the commission has received a prepared list of partisan ad-hoc staff from the All Progressives Congress, Yakubu challenged the Peoples Democratic Party (PDP) to provide evidence to substantiate its allegation.

The INEC chairman said it is common to hear politicians making baseless allegations.

He said: “By and large, all we have to say is to ask those making these allegations to provide to INEC actionable evidence and we will move into action. Give us evidence and INEC will act swiftly.”