Another disaster was averted today after a fuel tanker fell in Onitsha with many people running for their lives. 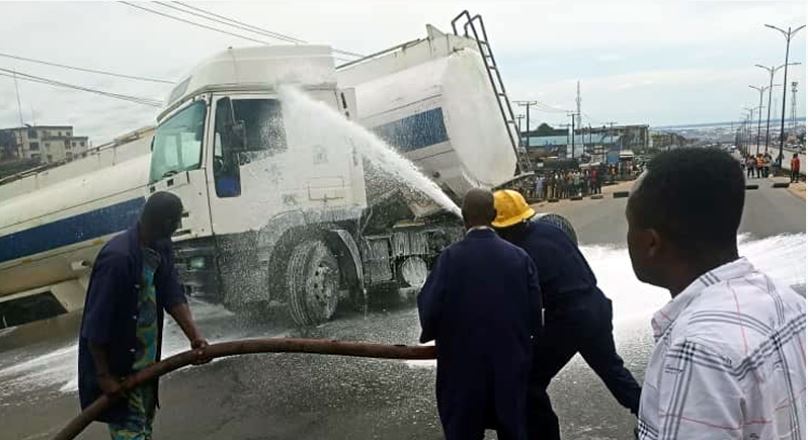 Petrol tanker falls in Onitsha
Another fuel tanker on Thursday fell in Onitsha, Anambra State leaving many people in panic mode.
Recall that the incident is coming barely two weeks after two fuel tankers fell in the city with several people dead and property destroyed.
A source said the tanker loaded with fuel fell around 1pm on the Onitsha/Enugu Expressway.
According to Punch, thecontent of the tanker was spilling, making residents scamper for safety.
The Anambra State Police Command confirmed the incident.
In a statement by the Police Public Relations Officer, Haruna Mohammed, the command said commuters had been advised to use other routes.
His statement in part said,”A tanker loaded with PMS just fell into a ditch along Onitsha/Enugu Expressway by Chipex Filling station.
“The PMS is spilling out at the time of making this report. It is highly advisable you alert residents in the  Area through your medium to stay clear from the area in order to prevent any disaster.
“Police patrol teams have cordoned the area and Fire Service Department was equally contacted to be on standby in order to prevent fire incident.”
Top Stories