A pastor who used his church as a 'torture centre' in Lagos has been nabbed as 15 victims are rescued. 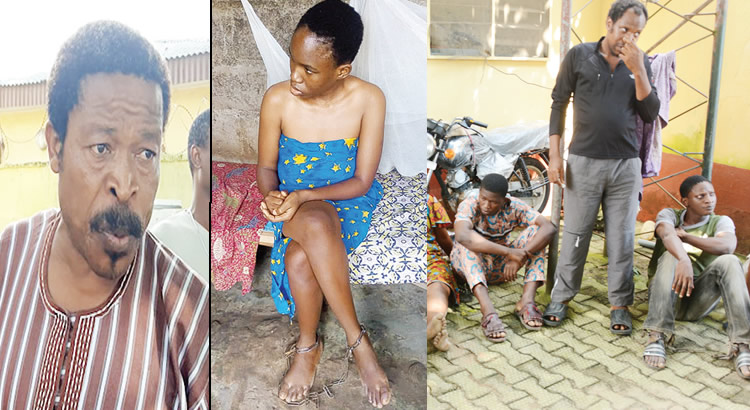 According to a report by Punch Metro, a pastor, Joseph Ojo, has been arrested for allegedly using his church, the Blessing of Goodness Healing Church, Ijegun area of Lagos, as a detention centre for mentally ill persons and persons suffering from various ailments and social vices.

It was gathered that Ojo was arrested after 15 sick persons, who were chained inside a building on his church premises, were rescued by men of the Lagos State Police Command, led by the Divisional Police Officer, Isheri-Osun Division, stormed the church on Wednesday following a tip-off by the National President of the Eagle Crime Awareness and Prevention Initiative, a non-governmental organisation, Samuel Adam.

When PUNCH Metro visited the Church on Thursday, four victims, some of whom were speaking incoherently, were seen chained to the ground.

Ojo, however, told our correspondent that the victims were chained because of their condition, adding that their parents brought them to the church for healing.

He said, “The people were chained because of their condition. If I did not chain them, they would run. Many of them had put me in trouble in the past and that was why I chained them. When I see that they are healed, I unchain them.

“This is not a psychiatric hospital; all of them came for prayers and they had been taken to different psychiatric hospitals before they were brought to the church for deliverance. I saw the medical papers of some of them and it was when their parents tried conventional medicine and they were not cured that they brought them here.

“We do chain them for around three to four months and it is their families that do feed them; some of their family members come every day; some weekly; and some live with their children in the church. You may think that they are healed; for instance, one of them carried a big stone and wanted to use it to break another person’s head before he was stopped.”

One of the victims, Adewale Adetona, who had been chained for eight months, alleged that he was kidnapped and brought to the church by his family, adding that he was not happy staying in the church.

The Oyo State indigene said, “One early morning, I was kidnapped from where I was sleeping and taken to the church and I was staying there until the police came to rescue everybody from the church. I am not happy staying at the church, because I have my own life to live. I am just here; I can’t live my normal life and do what I want to do.

“There was no negotiation for me to be brought here. There are unstable people in the church, so what am I doing here? I feel embarrassed being chained, but I am happy that we have been rescued; since I got here, they never removed the chains from my legs.”

Adetona’s mother, Monsurat, however, said she took her son to the church for spiritual healing, adding that his behaviour was embarrassing her in public.

“He usually misbehaves and I feel embarrassed about it. I have taken him to hospitals for healing before I heard of the church, where spiritual attacks are sorted out. But, if I told him to follow me there, he would refuse, that was why I forcefully brought him to the church in March this year and I have been seeing some improvement in his condition,” she stated.

Another victim, Solomon Ogbokri, said he was chained for eight months while supposedly being delivered of addiction to alcoholic, adding that his parents brought him to the church.

Solomon’s father, Godspower, said he took his son to the church after several attempts to wean him of alcohol and hard drug addiction proved abortive.

The 65-year-old said, “He goes about taking drugs like Indian hemp and roaming the streets; I prefer him in the church than roaming about, because he is now better. I don’t want him to go back to Ikeja, where he was taking drugs.

“I enrolled my son at the Federal Polytechni Ilaro, and another polytechnic in Ota, but he did not finish. I took him to the Fingers of God Rehabilitation Centre, the Synagogue Church of All Nations and the Federal Neuropsychiatric Hospital, Yaba, but there was no solution.”

When contacted, the Police Public Relations Officer, Bala Elkana, said the command had commenced investigation into the case, adding that 15 victims had been rescued from the church.

“We have rescued 15 victims and arrested 11 persons, including the pastor, Joseph Ojo. Some of the victims were said to have spent five years in the detention camp. The victims are between ages 19 and 50 and some of them were brought by their families. We have commenced investigation into the matter.”