Two bus robbers met their waterloo after they were apprehended by officials of the Lagos State Neighbourhood Corps while operating. 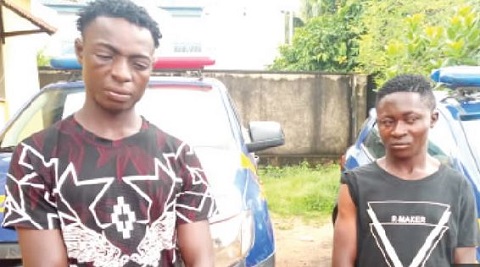 The suspects, six of whom are still at large, reportedly boarded the bus from Tollgate, Lagos-Abeokuta Expressway, Ogun State, en route to Oshodi around 7.30am.

It was gathered that the assailants suddenly brought out weapons on reaching Ijaiye area and started beating up the passengers.

It was gathered that the driver quickly drove to a halt and raised the alarm which caught the attention of passersby and LNSC officials around.

The spokesperson for the corps, Mr Adewale Afolabi, who confirmed the incident in a statement on Friday, said the robbery was thwarted.

He said one of the arrested suspects, Chukwuka, confessed to being a member of the aiye confraternity.

He stated, “Today, Friday, at 7.45am, Mr Samuel Abiodun and some other passengers were attacked by eight boys inside a BRT bus going from Tollgate to Oshodi with planks and other weapons. Two of the suspects,  Kenechukwu Chukwuka, 26, who is a native of Enugu State, and 23-year-old Adam Isiaka, a native of Lagos State, were apprehended by LNSC officers.

“However, six other suspects escaped and are still at large. Chukwuka and Isiaka both work at Ladipo Market. Chukwuka confessed to being a member of aiye confraternity holding meetings at Ajao Estate .The case has been transferred to the Ijaiye-Ojokoro Police Division, for further investigation and possible prosecution.”

The Chief Security Officer, Primero Company Limited, Mr Cletus Okodolor, which operates BRT in the state, said the bus wasn’t the company’s, adding that he was not aware of such incident.

He said, “Our own BRT buses shuttle between Ikorodu and TBS (Tafawa Balewa Square), Lagos Island. It could be one of the news ones given to other transporters.”