A police officer has been caught on camera shooting during an unwarranted arrest in Aba. 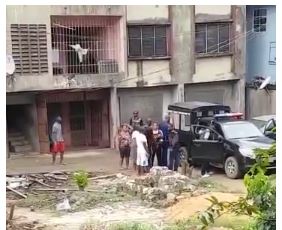 Police officer shoots in the air during unwarranted arrest
A video currently making the rounds on social media showed the moment a trigger happy Police Officer fired his rifle sporadically at the house of a someone they wanted to arrest.
According to reports, the arrest was unwarranted and so the people hesitated on getting into the Police vehicle.
In a bid to thwart the resistance, the police man fired three shots into the ground right in the presence of the unharmed civilians at the scene.
See video below:
Top Stories