Many people were forced to run for their lives after fire razed down a factory in Lagos. 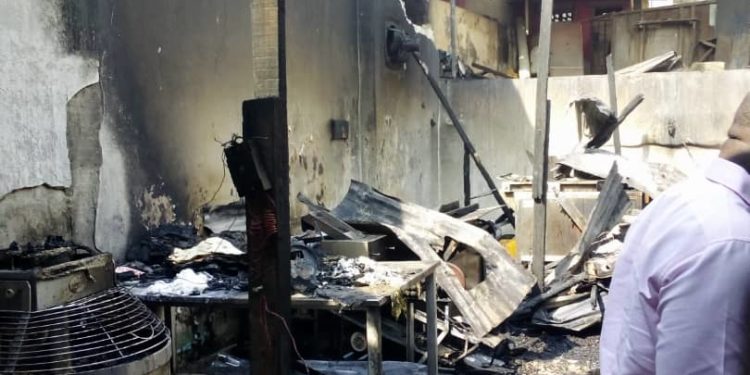 Chinchin factory razed by fire
Fire gutted a chinchin factory in Ago-Owu street, Bariga, Lagos State destroying property and goods worth millions of naira, according to TheNation.
The company named Didaskalosvado Nig. Ltd. got razed by fire on Monday morning caused by a major electricity spark.
The unfortunate incident was managed by youths in the neighbourhood to avoid a widespread before the arrival of men of the Lagos State Fire Services.
The Nation gathered that no casualty was recorded at the scene of the incident but however, properties worth Millions of Naira got destroyed in the inferno.
The inferno partially also affected the neighbouring premises including a school named Young Flower Nursery and Pry School, Ago-Owu, Bariga, Lagos.
The environmental health officers from the local government further advised the workers to evacuate from the main factory to the main compound.
At the time of the incident, the combined team of Environmental Health Officers, Neighbourhood watch officials, Police Officers and the Fire service were on ground to manage the situation.
Top Stories