Having been used and dumped by the PDP, he is left to face the music alone at the EFCC trial. 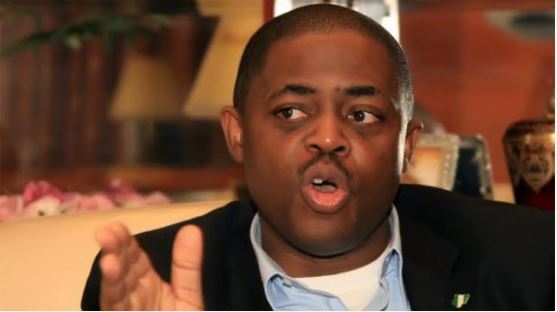 Femi Fani-Kayode has been without a job since 2015 when he jinxed the Peoples Democratic Party (PDP) out of government. Things have been hard and his only source of income is to peddle fake news.

He once claimed DSS had invaded the home of former CJN, Walter Onnoghen. He even once said Osinbajo would be forced out many months ago.

But I will like to set the record straight with the latest FAKE NEWS by Femi.

When you see a deranged fellow like FFK being vocal in public you need to first ask if he has taken his daily meds. For someone who failed as a minister in a government that did not even require him to perform at any extraordinary level, you wonder what standing he has to make the kind of brainless statements he throws out on social media.

Having been used and dumped by the PDP, he is left to face the music alone at the EFCC trial. All this posturing and social media bravado he tries to put up are a pointer to one thing, he is trying to curry favours as the professional political jobber that he is.

Even his former boss, Obasanjo has told the whole world the type of character that FFK is. “Femi Fani-Kayode is my boy. Provide him food, he will eat and then sing for you. He’s a smart boy.” This is the summary of all that FFK stands for in Nigerian politics. He is even putting the cart before the horse now, as he is now singing like a drowning canary before anybody has given him food these days.

Femi the new estate agent in Abuja should do well to tell us the address of this ‘rented apartment in Maitama’ that he claims the aides were moved to. Which office is paying the rent? Clearly Femi is just another tale-bearer who gets his news from beer parlour gossip with zero evidence.

He is trying to posture himself as a champion of the South West but even the most uninformed political novice can see the blatant irrelevance of this substance-abuser that should be in a rehab clinic, due to his prolonged relapse episodes since 2015.

This is 2019 almost ending and FFK is yet to find any positive endeavor that can keep him gainfully employed. He got sidelined at the PDP convention after they sold him a dummy by making his wife (remind me of her serial number on his wife-beating list) a member of the PDP Convention Sub-Committee on Welfare.

For someone who got the best UK education money could buy, you would expect him to be the least bit intelligent on legal matters. This man studied Law for goodness sake! He has chosen to remain perpetually clever by half on all matters where the name Osinbajo is mentioned. He is keeping true to his jobbing stock in trade, holding out in the hope that he will be invited to “come and chop” in this administration. The usual modus operandi is to make enough noise that they will eventually give you something to keep you quiet. That template is now very outdated.

The man you try to castigate by calling him an errand boy is more globally respected than you could ever dream of, even in your most befuddled chemically-induced hallucinations. The video is out there when high level professionals were scrambling for his autograph before he could leave the podium at the Intra-African Trade Fair 2018 (IATF) in Egypt after he gave a deeply insightful speech in Egypt, with no papers in hand as usual.

FFK cannot claim to be wiser than millions of Nigerians who voted and are still in support of Osinbajo and Buhari. Even with all his ‘famzing’ that he attended Cambridge with the Chief of Staff, Abba Kyari, a good reason why is he still on the outside despite all the fabled alumni loyalty and fraternity of the old boy network, is that FFK is one of the most toxic and treacherous fellows in Nigerian politics. The apple does not fall far from the tree, if you know, you know.

The social elite that he calls his friends in Abuja now tactically avoid him like a chronic leper. No amount of pontificating and bible quoting for devious and mischievous reasons can change the facts of the matter. Osinbajo is light years ahead of FFK and his whole lineage. Yes I said it.