A man has set his house on fire to kill his newborn triplets after a misunderstanding with his wife. 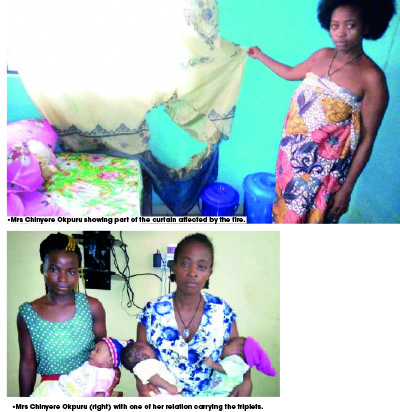 Man sets house on fire to kill his kids
A father of eight has set his apartment ablaze to kill a set of triplets that God blessed his family with recently. The tragic incident took place in Abakaliki, Ebonyi State.
Chinedu Okpuru Mgboke, a 45-year-old aluminum fabricator, was alleged to have set his rented apartment on fire following a mild misunderstanding between him and his wife.
Sunday Sun gathered that at the centre of their misunderstanding, was, who should be in charge of over N3 million given to the couple as assistance by the Ebonyi State government through the Ministry of Women Affairs and Social Development, after the delivery of the triplets.
The woman was delivered of the babies about five months ago at the Alex Ekwueme Federal University Teaching Hospital, Abakaliki (AE-FETHA), where the attention of the government was attracted to pick their medical bills.
A resident of the area, Mr Okemini Isaac, told Punch that the problem came to a head that fateful day, after the man’s wife; Mrs Chinyere Okpuru went and withdrew the sum of N20,000 from the bank for their upkeep. But on reaching their house, her husband reportedly requested for part of the money which she instantly gave to him.
According to Okemini, after sometime, the man started raging in anger and in the process threatened to kill the babies to close that source of assistance and invariably end his wife’s alleged embarrassment to him. The man felt that the small money put under his wife’s control had given her some measure of power over him.
Our source disclosed that as soon as the woman whom he said did not take her husband’s expression of anger seriously, stepped out of their house for an errand, the husband allegedly grabbed a container of kerosene, poured the content inside their house and put it on fire.
He added that the saving grace was that his wife came back almost immediately as the fire was gradually becoming intense, and upon her discovery of the husband’s unpleasant action, raised the alarm and through the help of their neighbours, the fire was controlled while the children were rescued unhurt.
By this period, some upholstery, their curtains and some other items in the room had been affected by the fire.
Recounting her ordeal to our reporter, Mrs Okpuru said: “My husband has been in this habit of maltreating me before the birth of these triplets, by then I was a hawker, selling canned drinks at motor parks and each time I returned without remitting money to him, he would simply throw my remaining wares outside, upturn my hand bag and seize any money found in it.
“On that fateful day, I went and withdrew the sum of N20,000 and out of the amount, the sum of N5,000 was given to him in spite of the fact that he could not use it for something else than alcoholic drinks, this is the reason I did not take his scolding seriously until when I discovered through his action that he really wanted to kill the children, I then raised the alarm.”
The mother of eight revealed that she has been suffering in silence in the marriage not minding her effort to keep their marital life going.
The woman’s brother, Mr Ikechukwu Nkwegu who corroborated the story added that immediately he heard about the dastardly act, he ordered for the in-law’s arrest.
He claimed that his sister and her other five children were experiencing hell caused by hardship before the birth of the triplets which brought the couple some fortune courtesy of Governor David Umahi.
Nkwegu alleged that his sister’s life had been under serious danger since the financial assistance rendered by the state government because of her husband’s incessant threats.
He, therefore, appealed to the police and government authorities to warn his in-law seriously in order to avoid any untoward thing happening to his sister.
The father of eight was later taken into police custody at the Juvenile Welfare Centre, Police headquarters, Abakaliki, where he was said to have confessed: “I was confused during my action,” claiming that he did not know what came over him.
He was reportedly detained for about two days before he was later released by the police after giving him stern warning and counselling from the officials of the state Ministry of Women Affairs and Social Development.
However, Sunday Sun gathered that the bickering between the couple had not abetted as at last Friday.
The distraught nursing mother told Sunday Sun that “Even now that he had been released by police, still he had not ceased from abusing me verbally by calling me all kinds of derogatory names and based on this, I am appealing that he should be called to order”.
One of their neighbours who would not want to be named said: “The man wouldn’t allow this woman to rest. Every time he keeps threatening that he would deal with her. Instead of them to work together and train their kids; he’s always threatening fire and brimstone”.
Top Stories