The World Of Female Painters, Decorators: Stories Of Nigerian Women Doing It Big In Painting


The stories have been told of Nigerian women doing it big as painters and decorators. 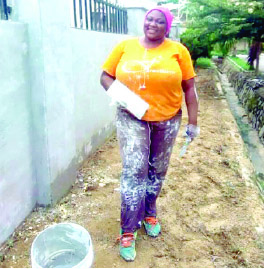 Rita Christopher, also known as Maryam, an indigene of Bokkos Local Government Area, Plateau State, is a typical example of the saying that what a man can do, a woman can do better.

Currently becoming a big brand in the male-dominated industry, the National Diploma (ND) holder in Business Administration and Management from Plateau State Polytechnic took Daily Sun down memory lane on her journey into the profession that has shot her to limelight.

She explained that her work entails painting of houses and more importantly, the finishing, such as mounting Plaster of Paris (POP), painting and others. Recalling how the journey all started, she said that as a girl, she never had any inkling that she was going to be a painter nor deal on anything connected to building construction, but that she just found herself in the line of business.

“As a girl, I never thought I was going to be a painter or deal on anything about building construction at all. But as the years went by, I began the supply of sand from the river when I was in school to pay for my textbooks, assignment and other school requirements,” she recalled.

Christopher further said of that although she didn’t pick interest in the job at that time, as fate would have it, a friend invited her to take part in a painting job which she gladly accepted, adding that since then, she never looked back on that path of business.

“Although I didn’t pick interest then, later on, a friend of mine who works as a painter with an Italian company had asked me if I can be a painter. She trained me for just six months and I immediately picked up. That was how I started the journey into the world of painting,” she said.

Asked how lucrative her job is, she said: “It is lucrative. You make your money and you get to meet new people. You also get to learn new things because the job is creative and it is not a profession in which you remain stagnant. Every day, new designs keeps popping up, so you have to update yourself everyday and train yourself to meet up with the trend,” she said.

Currently, Christopher has five apprentices; four males and a female. She reveals that her target is to train more women on the job over the years. On the stress associated with the job, she said: “Some clients can make your job very stressful, some make it easy, while some make it neither easy nor stressful. It is stressful seriously. My clients are mostly men and sometimes women. I meet most of my clients based on recommendations and through adverts I do on Facebook.

“Many of them feel intimidated but I feel just like a normal girl who just wants to work. Some of my clients tell me that they want to give me jobs but are hesitant to do so. They won’t want to say the reason but I will just put one and two together and I will say it is fine. But some people will introduce their wives to me and tell me that I should do whatever the wife decides.