The baby sustained gunshot wounds to the head, torso, and rear of his body, a police department spokeswoman told NBC News. 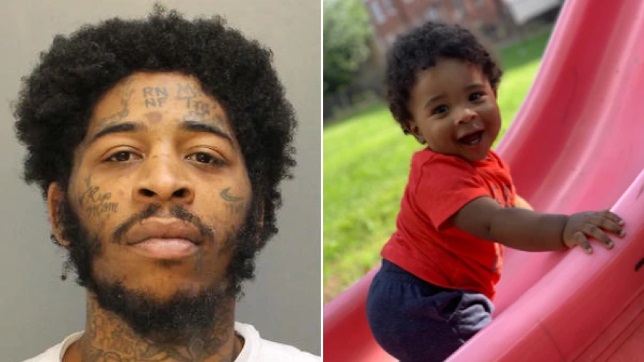 A reckless father has been accused of using his 11-month-old baby as 'human shield' after he took the child to a drug deal that got bloody.

Nafes Monroe was arrested over the weekend in connection with the Oct. 19 shooting, Anthony Voci Jr., the chief of the Philadelphia District Attorney’s Homicide Unit, said at a news conference.

Monroe is charged with recklessly endangering another person and endangering the welfare of a child.

The district attorney's office said the 11-month-old boy was shot multiple times after his father allegedly took him to a Philadelphia drug deal as a "human shield," believing the baby's presence would forestall violence.

The child was in a vehicle's back seat with Monroe and Monroe's girlfriend at the time of the shooting, authorities said.

The baby sustained gunshot wounds to the head, torso, and rear of his body, a police department spokeswoman told NBC News.

After the shooting, Monroe did not rush his son to the hospital but instead drove him to a house, according to Voci. When he did take the 11-month-old to a hospital, "he never looked back and went into the wind so to speak," Voci said.

Monroe, who also uses the aliases Nafis and Nyfes, was wanted on a probation warrant and was using counterfeit money to purchase drugs at the time of the incident, Voci added.

"This was not the first instance of Mr. Monroe using counterfeit money and, in fact, some was found in the car that his son was shot in," Voci said. "And it’s our belief and our investigation has led us to believe that he intentionally had his child with him when he was making such types of purchases with the idea or belief that if someone saw that he had a child in the car, that they would not fire upon him."

When asked if Monroe allegedly used the child as “protection” in a drug deal, Voci said: “A human shield is probably the term that I would use.”

According to Police, if the baby survives, he does not have a chance of a full recovery and will most likely be quadriplegic