President Muhammadu Buhari is back in the country after his private visit to the United Kingdom. 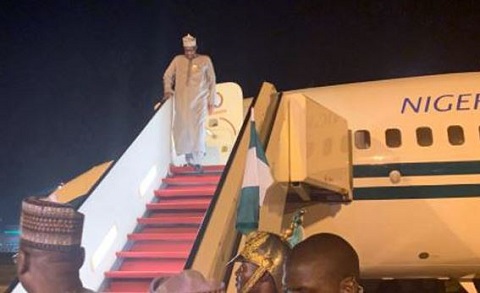 President Muhammadu Buhari has returned to the country after a “private visit” to the United Kingdom.

The president headed to the UK from Saudi Arabia where he attended the third edition of the Future Investment Initiative (FII) after departing the country on October 27.

The aircraft which brought him from the UK touched down at the Nnamdi Azikiwe International Airport in Abuja at 9:45pm.

On the ground to receive him were Abba Kyari, chief of staff to the president; Mohammed Bello, minister of federal capital territory (FCT); Tukur Buratai, chief of army staff, Mohammed Adamu, inspector-general of police, among others.

Speaking to reporters at the Presidential Wing of the Nnamdi Azikiwe International airport Abuja, President Buhari says he intends to work harder and be accountable to Nigerians.

FLASH: President Muhammadu Buhari has returned to Abuja this evening, after a private visit to London, the United Kingdom. pic.twitter.com/kidwPIMWS3