Horror! How Policemen Driving Against Traffic Crushed Two People To Death In Ogun


Some police officers who were driving against traffic have ended up crushing two persons to death. 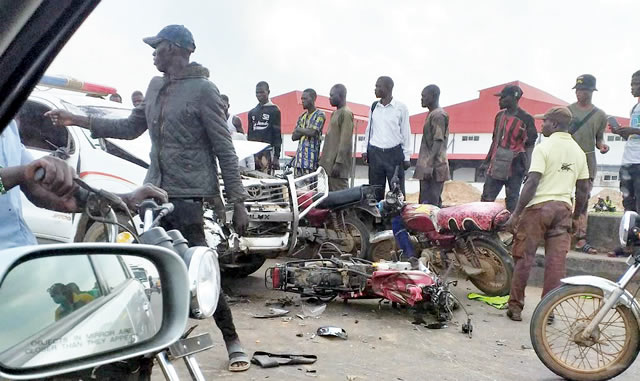 A report by Punch Metro has shown that some policemen allegedly driving against the traffic, on Monday, crushed two motorcycle passengers to death on the Long Bridge end of the Lagos-Ibadan Expressway in Ogun State.

According to eyewitnesses, the policemen in the patrol vehicle took to their heels after the accident occurred around 10.50am, while emergency responders, who rushed to the scene, took the injured victim to hospital.

The remains of the deceased were said to have been deposited in the Lagos State Emergency Centre at the old tollgate area.

An eyewitness, who spoke on condition of anonymity said, “When the accident happened, the policemen ran out of the vehicle and jumped off the bridge and ran away. No one could catch them.”

At the scene of the accident, other commercial motorcyclists, while mourning the death of the vicitms, threatened to burn the van.

During the rescue operation, a Federal Road Safety Corps official, who spoke on condition of anonymity said, “We got the distress call and we came down to the scene, but before we got here, we realised that the people around had done the rescue.”

When contacted, the Sector Commander, FRSC, Ogun State, Clement Oladele, said one of the three victims involved in the accident died.

Oladele stated, “Three people were involved in the accident, one died and the two injured victims were rescued to the Lagos State Emergency Centre, Ojota. The corpse of the dead victim was deposited in the hospital’s mortuary.

“The suspected cause of the accident was route violation as the driver of the vehicle was speeding, while driving against the traffic. The vehicles involved were a white Toyota Hilux pickup van with number plate GGE 960 DD and a Bajaj motorcycle with number plate MEK 418 VH.”

However, the spokesperson for the police in Ogun State, Abimbola Oyeyemi, said two passengers died, while the motorcyclist sustained injuries and was rushed to hospital, where he is responding to treatment.

He said the vehicle involved was registered and branded, adding that it had been impounded and the owner/driver would be traced and made to face justice.

Oyeyemi said driving against the traffic was a serious offence and security agents were not allowed to do so except in emergencies, and such vehicle would be a security vehicle or an ambulance, which must carry a sign that would alert people to the emergency.

He added that investigation into the accident was ongoing and gave an assurance that the driver would be identified, arrested and prosecuted, adding that the Commissioner of Police in the state had directed that everything possible must be done to apprehend those involved, whether they were policemen or ordinary citizens.