Colonel Aminu Iliyasu, the Nigerian Army Operations Media Coordinator, made the disclosure in a statement issued on Tuesday. 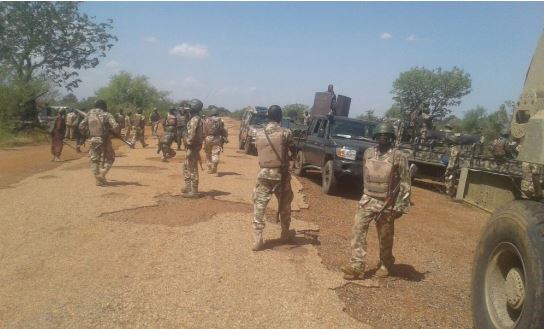 Troops of the 153 Task Force Nigerian Army have ambushed Boko Haram insurgents and recovered arms at Ala Village, 7 km away from New Marte in Borno State, Northeast Nigeria.

Colonel Aminu Iliyasu, the Nigerian Army Operations Media Coordinator, made the disclosure in a statement issued on Tuesday.

The statement said, “in yet another incident of tactical boomerang in the face of superior tactics and training, in the early hours of 18th November 2019, troops ambushed some remnants of the criminal Boko Haram insurgents along the patrol route at Ala Village, 7 km away from New Marte.

“In a rare display of boldness, resilience and faithful service to their fatherland, the troops, rather than getting discouraged by this sudden attack on them, turned around the initial setback and dealt a devastating blow on their criminal attackers.

“Having so clearly asserted their superiority in the ensuing firefight, the criminal insurgents were forced to flee in disarray.

“The gallant troops then embarked on a relentless pursuit of the scampering insurgents who abandoned some of their fighting equipment in utter confusion,” he said

“At the end of the pursuit and exploitation, 2 Gun Trucks, 2 Anti-Aircraft Guns, 2,080 Rounds of 7.62mm NATO ammunition, 26 Rounds of 12.7 mm Armour Piercing Incendiary ammunition, 3 AK 47 Rifles, 6 Rounds of 12.7 mm (Belted), one AOJOE motorcycle, some clothes, food stuffs and mechanical tools belonging to the criminals were captured by the troops.

” Most of the Boko Haram criminal elements were believed to have escaped with varying degrees of gunshot wounds. However, troops continue to dominate the area with patrols to deny the criminal insurgents freedom of action.

“Recall that, less than two weeks ago, it was reported that Boko Haram criminal elements suffered a tactical boomerang when a sizeable number of them were neutralised and many others maimed as they mistakenly stepped on the same improvised explosive device that they had earlier planted against our troops.

” The Chief of Army Staff, Lieutenant General Tukur Yusufu Buratai Commended the troops for their gallantry and equally wishes to reiterate the commitment of the Nigerian Army to accomplish its constitutional mandate professionally and responsively for a secured Nigeria,” the statement said.