The command also arrested 20 suspected smugglers within the period and seized four wooden boats used in carrying the rice. 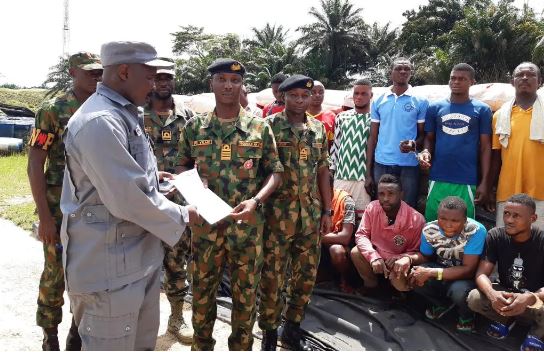 The culprits being handed over

As the borders in Nigeria remain closed, the Nigerian Navy, Forward Operating Base, Ibaka, Mbo local government area in Akwa Ibom State, said it has seized about 1,425 bags of rice smugled into the state between 12th and 18th November 2019.

The command also arrested 20 suspected smugglers within the period and seized four wooden boats used in carrying the rice.

The Commanding Officer, FOB, Navy Captain Peter Yilme while addressing the media, said Navy gunboats, during patrols, seized the boats on Effiat waterways, carrying 50kg bags of rice brought in from the Republic of Cameroon.

While handing over the suspects and items to the Nigeria Customs Service (NCS), Yilme said the Nigerian Navy has zero tolerance for criminality and warned smugglers to desist from the act, especially within FOB, Ibaka area of operation.

Yilme, who was represented by the Base Operations Officer, Lieutenant Commander Kabiru Yusuf, said the base, in the last one month handed over 3,800 bags of smuggled rice, 60 drums of illegally refined Automated Gas Oil (AGO), and 60 suspects to the Customs component of Operation Swift Response for necessary action. 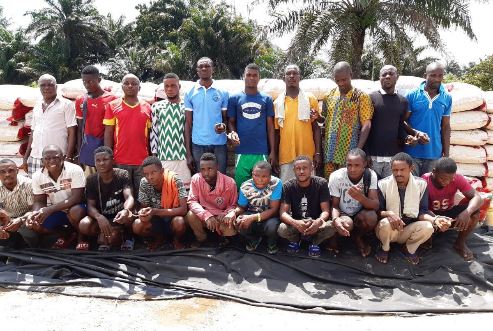 “Four wooden boats carrying a combined 1,425 bags of 50kg parboiled rice suspected to be smuggled into the country and 20 suspects were impounded and arrested by the Forward Operating Base, Ibaka.

“I commend the untiring efforts of the officers and ratings in ensuring the mandate and tasks of the Base are achieved. I also appreciate the immense effort of the Chief of Naval Staff, Vice Admiral I. E. Ibas for providing the necessary platform and logistic support for the Base to carry out its operations,” he said.

Receiving the 20 suspects from the Nigerian Navy, Deputy Superintendent of Nigeria Customs Service (NCS), Alabi, Adedokun commended the Navy for the cooperation existing between them, and for the frequent arrests.

One of the suspects, Peter Okon, a married man with three children from Okobo local government area of Akwa Ibom State, said joblessness led him to smuggling the rice.

He said it was his first time in smuggling rice and that the owner of the rice promised to pay him N2,000 to bring in 200 bags of rice from Cameroon to Nigeria.

He noted that since he lives in the creeks in Cameroon, he had no knowledge that the Federal Government had closed the borders to stop the smuggling of rice into Nigeria.

He said, “As you can see, we are jobless people. I am a worker in the boat and the owner of the rice gave me N2,000 to bring in 200 bags of rice from Cameroon. This is my first time; I live in the creeks in Cameroon and I have three children to feed”.

Another suspect, 23-year-old Samuel Etim from Oron local government area of Akwa Ibom State said he was not involved in smuggling the seized rice.

He stated that he was a fisherman in Bakassi and boarded the rice boat because he had no money to pay his fare.

“I don’t know anything about the rice. I joined the boat carrying the rice from Bakassi because I didn’t have money to pay for my fares,” he said.