CCTV footage shows horrifying video of a n*ked man chasing a woman in the rain around a beach resort in Brazil in an attempt to overpower and rape her. 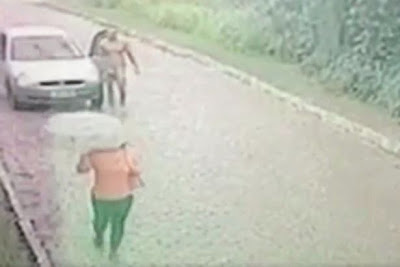 Chilling video emerged of a woman running for her life from a n*ked motorist in an apparent rape attack on a deserted road.

The woman, who cannot be identified, was walking alone in the rain around a beach resort in Buzios, Brazil, on Tuesday morning.

CCTV footage shows the woman walking along the edge of the secluded road while shielding herself from rain with an umbrella.

She appears to notice the car driving slowly behind her and steps onto the grass verge when it pulls up in front of her.

It is unclear whether the unsuspecting woman realises the driver was completely naked when he emerges from the vehicle, as much of the silver Ford Ka looks like it is shielding his lower half from view.

He suddenly chases after the victim as the woman starts to scream for help.

The pair disappear off screen and security cameras do not register the moment the aggressor catches up with her.

Later the man is seen running back to his car and driving off before returning to the city's main routes.

Police said the suspect tried to grab the victim around the waist after running after her.

They believe he would have overpowered her if she had not had the strength to pull away and run screaming for help.

The attempted sexual assault apparently occurred out of sight of surveillance cameras but operators monitoring the alarming incident swiftly identified the suspect by zooming in on the vehicle’s license plates.

The n*ked pervert, who has not been named, was arrested on the same day.

He was detained within a matter of hours and charged with the lesser crime of sexual harassment pending further investigations. 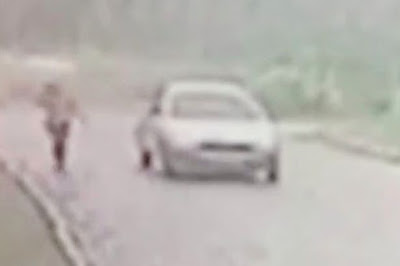 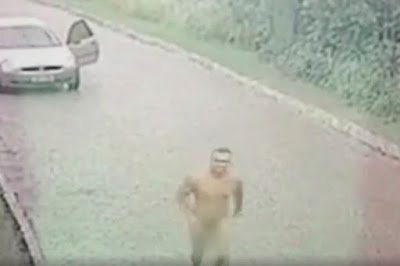