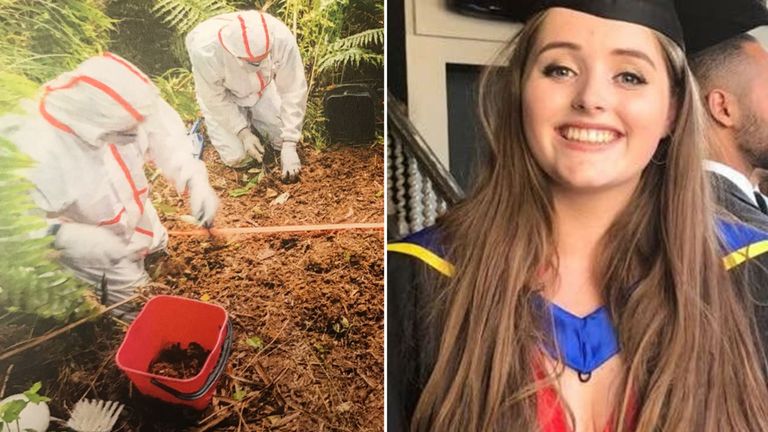 In a statement read to the jury at Auckland High Court the man, whose identity is protected, said:

‘When we researched it we knew the word was asphyxiation. Grace and I discussed keeping hands wide and on the side of the neck, never on the front.

‘Grace and I would have a safe word most of the time which we had discussed, something like “turtle” or something ridiculous.

‘Grace and I used a tapping practice too. If Grace tapped me three times then it would stop.

‘Grace would tap out maybe one in four times. Grace would be sure to do this and I trusted that anytime it was too much for Grace she would do this.

‘All the evidence shows that Miss Millane was a loving, bright, intelligent young woman and she was.

‘The fact that we need to discuss with you what she liked to do in the bedroom should have no impact on he reputation at all.’

He added: ‘It’s important that we are fully informed. It’s not the time for embarrassment or immaturity.

‘If this couple engaged in consensual sexual activity which included pressure being applied to her neck with her consent and that went wrong, that is not murder.

‘Death through this mechanism may thankfully be rare but it does happen and sadly it happened here.’

Grace died at the defendant’s apartment in Auckland last December.

His police interview played at the trial last week, the defendant said he only realised Grace was dead when he found her lying on the floor. Although, he admitted that he later crammed her body into a suitcase which he buried in a shallow grave in nearby woodland.

Mr Mansfield claimed the defendant’s failure to call for help, disposal of Grace’s body and initial lies to police were due to ‘panic’.

He told the jury: ‘He may have thought he wouldn’t be believed, but don’t prove him right.’

The court has also heard evidence from pathologist Dr Fintan Garavan, appearing for the defence, who told the jury that due to the volume of alcohol Grace had drunk during the date, her heart may have gone into a ‘terminal tailspin’ when she was choked.

"He told the jury a combination of obstruction of the blood flow, pressure on her nervous system and being drunk meant she might have died quickly. He said there were no signs of her having struggled and that it ‘would not be obvious to a person nearby unless you know what you are looking for’ that she was in any danger.

A second defence barrister, Ian Brookie, told the court Grace had drunk six cocktails and a tequila shot and had shared three half-litre jugs of margaritas and sangria with her alleged killer while on their date.

Dr Garavan said: ‘It very likely has become an important indirect player in causing death’, explaining that being drunk could turn off a ‘safety valve’ which would normally trigger someone to fight for breath.

He agreed the primary cause of death was asphyxiation, which he said would have required just one kilogram of pressure. But under cross-examination, Dr Garavan agreed that once someone had become unresponsive during choking, the hold on their neck would have to continue for several minutes before death occurred.

He added: ‘You would expect a sober person would notice something but not necessarily a drunk person.’ The trial continues.

Mr Mansfield said he admits Grace died from pressure he placed on her neck but said expert evidence was consistent with his account that it was consensual, not violent.