Three pensioners have been allegedly murdered by a paranoid schizophrenic who thought they were paedophiles. 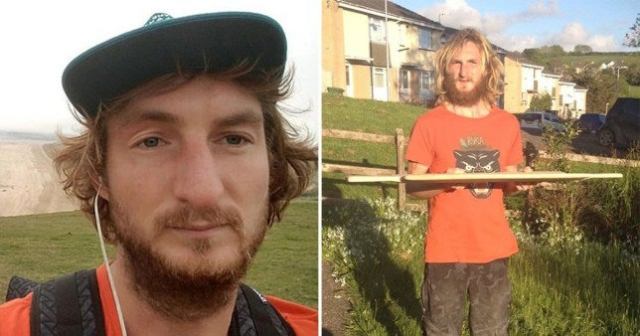 Alexander Lewis-Ranwell, 28, was under the delusion that he had uncovered a paedophile ring so killed Anthony Payne, 80, and twin brothers Roger and Dick Carter, 84, in February.

He is on trial for murder after admitting to the killings but denies murder on the basis of insanity.

All three victims were killed within the space of a couple of hours in Exeter, Devon. Prosecutor Richard Smith said he first killed Mr Payne after coming across a run-down property at 12.30pm on February 10.

He told Exeter Crown Court: ‘[Lewis-Ranwell] stopped at Mr Payne’s house and read a note on the door which spoke about the occupant being an elderly man of 80 years of age.

‘The defendant went in through the front door and found or followed Mr Payne upstairs to the bedroom. ‘The defendant took up a hammer and bludgeoned Mr Payne to death with blows to the head.’

His second victim asked Lewis-Ranwell to leave when he turned up at his home in Cowick Lane, Exeter.

However, he went round to the back of his house where he found a spade, climbed over a wall then beat the twins to death with the tool.

Prosecutors and Lewis-Ranwell’s team both agree that he has partial defence of diminished responsibility.

Mr Smith told the jury there is no doubt that Lewis-Ranwell was suffering a mental illness at the time.

‘The question you will have to ask at the end of your deliberations is whether or not this defendant knew at the time he killed these three old men that what he was doing in taking their lives was against the law,’ he added.

The prosecution say Lewis-Ranwell bears some responsibility for what he did. They do not agree he was legally insane at the time of the killings.

Lewis Ranwell has admitted killing the three men but says he was insane at the time, the judge said. At the start of the trial Mrs Justice May told the jury: ‘His plea is on a special basis. It is not guilty by reason of insanity.’ She added: ‘We will be looking at what was in his mind at the time of the killing.’