Irked by the ruling of the Tribunal, the APC candidate approached the appellate court, urging it to set aside the decision of the trial court. 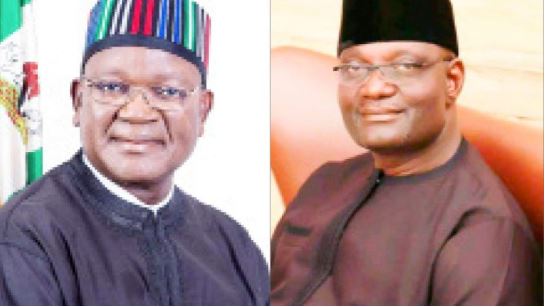 The Court of Appeal sitting in Abuja, on Thursday, reserved judgement in the appeal entered against Governor Samuel Ortom of the Peoples Democratic Party (PDP) by the candidate of the All Progressives Congress (APC), in the last governorship election in Benue state.

The Governorship Election Petition Tribunal sitting in Makurdi had on 7th October 2019, delivered judgement in favour of Governor Ortom.

Irked by the ruling of the Tribunal, the APC candidate approached the appellate court, urging it to set aside the decision of the trial court.

Counsel to Governor Ortom and PDP had on Tuesday, 19th November, received a notice of hearing from the Court of Appeal, Makurdi Division, informing them that the court would hear the appeal in Makurdi on Thursday, 21st November.

Controversially, the Court of Appeal, Abuja division also sent a notice of appeal, same day, informing the legal team of the governor and the PDP to proceed to Abuja, for a hearing slated for Thursday, 21st November.

At the hearing in Abuja Thursday, Counsel to Jime and APC, Yusuf Alli (SAN), maintained that the election which brought Ortom as Governor did not comply with the provisions of the law.

He also argued that the card readers deployed by the Independent National Electoral Commission (INEC) were not used in some areas to the conduct of the election, he, therefore, prayed the appeal panel to upturn the decision of the Tribunal.

In their separate arguments in support of their briefs of appeal, Counsel to Ortom, Sebastian Hon (SAN); that of INEC, Offiong Offiong (SAN) and Chris Uche (SAN) of the PDP, urged the appeal panel to, not only dismiss the appeal, but also award cost to Jime and APC.

The trio argued that the Appellant failed to provide witnesses “both in quantity and in quality”, at the trial court, to substantiate the claim that there were irregularities in the conduct of the poll.

The counsel maintained that the issue of card readers, which the Appellant solely relied on, had been settled in various judgements by the Court of Appeal and the Supreme Court.

On the issue of noncompliance with the rules guiding the conduct of elections, the counsels to Respondents argued that, mere guidelines or election manuals from INEC could not have nullified the provisions of the Electoral Act 2010 (as amended), adding that the Appellant did not in any way, cite any section of the Electoral Act or the 1999 constitution that was breached during the conduct of the election.

Responding, Chairman of the 5-man Appeal Panel, Justice AA Begore, said the court would communicate the date of the Judgement on the Jime’s appeal to the parties in the matter.

Biafra: Anyone Against ESN is a Terrorist - Nnamdi Kanu
Recent Stories