How Honest Airport Cleaner Got The Attention Of President Buhari


The Buhari/Osinbajo Administration has been lauded for presenting the keys of a brand-new house to Mrs Ugwu to reward her honesty and display of the high level of integrity, 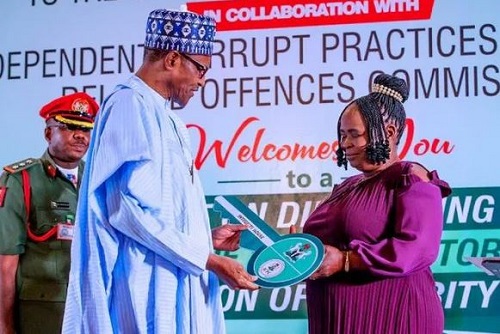 After some commentators on Social Media trolls made a jest of a Nigerian woman who discovered over N40m on different occasions at the Muritala Mohammed International Airport and returned same, a Nigerian drew the attention of the Presidency to her case and proposed a national recognition and award to honour her and encourage Nigerians to be honest.

That proposal eventually became a reality Tuesday morning at the Presidential Villa when President Muhammadu Buhari presented the Integrity Award to Mrs Jospehine Ugwu alongside another Nigerian man, a Customs officer, Bashir Abubakar who had rejected a 412,000 dollars (N150 million) bribe offered to him by drug traffickers to import 40 containers laden with Tramadol, a controlled and highly addictive drug.

According to Temilade Okesanjo, the Executive Director, Woodford Consulting Firm, who stumbled on Ugwu’s pathetic story on Instagram and a Television programme before presenting it to the presidency with a proposal, the recognition will lift the woman out of poverty and encourage more Nigerians to always display high level of integrity in their dealings irrespective of their status.

Narrating how she made the move to assist the woman through the presidency, Okesanjo said: “Ugwu was lamenting her fortunes and spoke about how she had returned millions of Naira at different times and yet not been “compensated”, while friends and family criticised her for not taking advantage of “God’s blessings”. 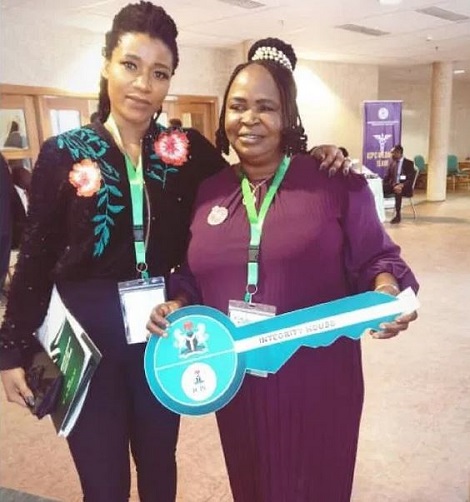 Moved by the pitiable condition of Mrs. Ugwu and the fact that most Nigerians who often get celebrated are people of questionable character, Okesanjo added: “I thought to myself, it’s high time we started celebrating people who even in the face adversity, choose to be honest and display integrity at the highest level.

“So, I made up my mind in that instant to do something about it. So, I took it upon myself to contact her. My team and I visited her a couple of times and recorded a short documentary of her story featuring her current circumstances and where she lived.

“We showed this to the Vice President and asked to work with the ICPC to bring her story to light and to work on bringing some of her dreams to reality. Of course, the Vice President approved this immediately and said that the President would love the story, as it captured the fact that there are many honest Nigerians who display the highest levels of integrity, and also that it is possible to be rewarded for being of a person of integrity.

“The Vice President asked what would be a fitting way to recognize her dedication to duty and integrity, and being that she had expressed the desire to live in and own a home in a decent environment, we suggested this, and worked with the Bank of Industry (BOI) to sponsor this.”

Okesanjo lauded Buhari/Osinbajo Administration for presenting the keys of a brand-new house to her to reward honesty and display of the high level of integrity, describing the gesture as a clear demonstration of the administration to the fight against corruption.

While urging Nigerians to remain honest in the face of adversity, she specifically expressed gratitude on behalf of Mrs. Ugwu to the Vice President Osinabjo for ensuring that the woman was honoured with her dream of becoming a landlord.

“We are pleading with Nigerians to be patient. Transformation is a journey; it is more a marathon than a sprint and will take a while to fully manifest.

“The various acts of integrity and dedication to duty consistently displayed by Madame Josephine happened over many years most notably with a huge sum of money which she found and returned in 2006, yet It took over a decade for her to reap the recognition she so deserved,” Okesanjo advised.