#ENDSARS: Man Narrates How SARS Officers Extorted Him At Gunpoint In Lagos


A man who was allegedly harrassed and extorted by some SARS officers has taken to social media to narrate his unfortunate ordeal. 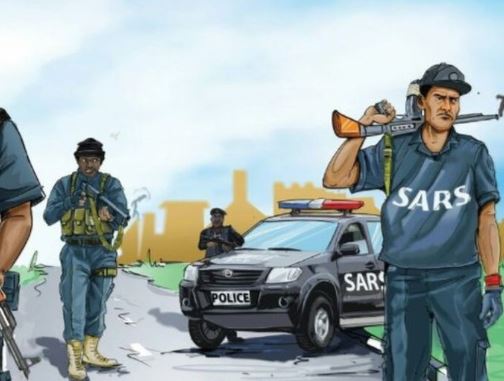 A has shared his harrowing experience with some SARS officials who assaulted him and demanded he handed over all his money at gunpoint.

A social media user FirstNnamdi recounted his experience in the hands of some SARS officials after one who he called a tout-looking officer, smelling of weed nabbed him while other officers immediately came out with their guns and one with a dagger who ended up demanding he all the money in his account at gunpoint.

#ENDSARS: Man recounts how he was exploited by some SARS officials at gunpoint in Lagos

Read his story shared below..

So, I just had an encounter with SARS on a hot Friday afternoon.

I was heading home from Gbagada as I was told mid-way that I couldn’t the Lagos Digital Summit, had ended.

Got to Ogudu, then I got a mad rough handling from the back.

The tout-looking officer, smelling of weed, wouldn’t even handle me normally till I hit his hands off. His colleagues came out of their bus with guns. One held a dagger. Took me into the bus, ransacked my phone, saw the SLACK app and foreign chats from over a month ago.

They started getting boners yelling “we dey carry am go Gbagada”, I kept asking “for what? Gbagada, to do what?” The one sitted beside me, asked “you dey work?”, I responded “Yes” they capitalized on that and said “You go explain!” I resisted, and an AK was pointed to my face

Instead of going through the same route to the said “Gbagada”, I was taken back to Ogudu, now I was confused, if they were taking me back or what? They never said. Until we got past where I was picked up, and further to Ogudu road. Now, Ogudu has 90% of major banks in Lagos.

With a heavy slap to my face, I was told to go withdraw everything in my acct. My phone was with them so they could see the alert&balance. Thank God I had diverted money before leaving home. I withdrew the 2k in there. They freed me saying it’s money for wasting their time.

This is the 3rd time this year my life is flashing through my eyes and I couldn’t do anything about it. Can’t imagine being a trending hashtag with RIP. Never!. Harassed and publicly humiliated by these animals. No dreads, no tattoos, no ridiculous haircut.