Makinde vs Adelabu: What God Revealed To Me About Oyo Election - Bishop Wale Oke


The cleric said there was no political position that was worth any person's blood. 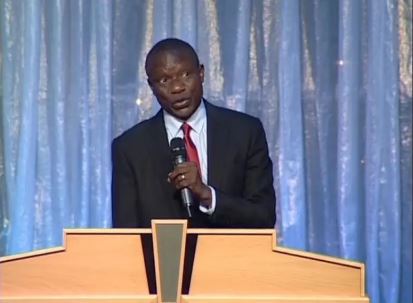 Bishop Wale Oke, the Presiding Bishop, Sword of the Spirit Ministries, Ibadan, on Sunday called for caution and prayers over the ongoing legal tussle on the last governorship election in Oyo State.

The Court of Appeal sitting in Ibadan, had set aside the tribunal judgement that nullified the petition by Adebayo Adelabu of the All Progressives Congress (APC) against the election of Governor Seyi Makinde of the People’s Democratic Party (PDP).

Oke, at a service to mark the annual press week of the National Association of Women Journalists (NAWOJ) in Oyo, said that God revealed to him that there were sinister moves and plans to cause chaos in the state over the Appeal Court judgment.

He said: “The recent judgment of the Court of Appeal on the last governorship election is neither here nor there. Even the lawyers are complaining, as both parties have been claiming victory at the court.

“The forces are only waiting for something sinister to happen at the Supreme Court. So God said we should pray for peace in the state.

“I am not for PDP and neither am I for APC. But I am for God and good governance in the state. I have told Gov. Seyi Makinde that if he fails to do what is right for the people, we will pray him out as we did for others.

“I have told him that what I need from him is good governance and he is trying his best. I have assured him that I will hold him by his collar to make sure he delivers to the people of Oyo state”.

The cleric, who lamented the recent attack on one of the state commissioners, his driver and police orderly, said there was no political position that was worth any person’s blood.

“We don’t want that era again in Oyo state. So we are calling for prayers and we want God to show His superiority, and God will definitely do that.

“The prayer is not that of APC or PDP; it for the peace and progress of Oyo state. God has commanded me and the church to organise a three-hour fervent prayer for the state on Nov. 30.”

Speaking on the controversial hate speech bill, Oke described it as an error from the National Assembly, saying that Nigerians didn’t want such draconian laws from the government.

He said such a law, with the death penalty as punishment, was an attempt by the government to silence the opposition and halt freedom of expression.

The cleric said: “Nigeria does not need such a draconian law. This is best seen as a means of stifling the opposition and freedom of expression in the country.”