Teenage Boy Revived After Drowning While Swimming With His Girlfriend (Video)


A teenage boy has been saved from the clutches of death after drowning while swimming with his girlfriend. 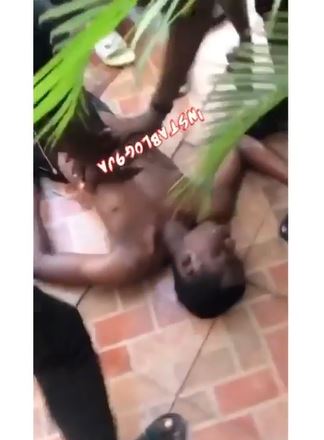 The boy was later revived
A tragic incident would have claimed the life of a teenage boy if not for the timely intervention of an eyewitness on Sunday at a swimming pool in Ajao Estate, Lagos.
It was gathered that the boy drowned while having fun with his girlfriend before he was spotted and rescued.
According to Chukwu – a fast-thinking eyewitness who was instrumental to the rescue, the victim was having fun in the pool with his girlfriend and a mutual friend, when he swam to the deep end.
However, he couldn’t make it back and couldn’t shout for help. Chukwu said: “What drew my attention to them was when I noticed the friend was smooching the girl and then I looked out for the guy and boom he was 12ft below the water.
"I guess nobody saw him early. But all thanks to Almighty God, he survived after almost an hour of resuscitation. The girlfriend fled immediately the incident happened and was later tracked down and scolded for abandoning her boyfriend.”
See video below: