An unbelievable number of worms have been found inside a man's brain after he reportedly ate pork. 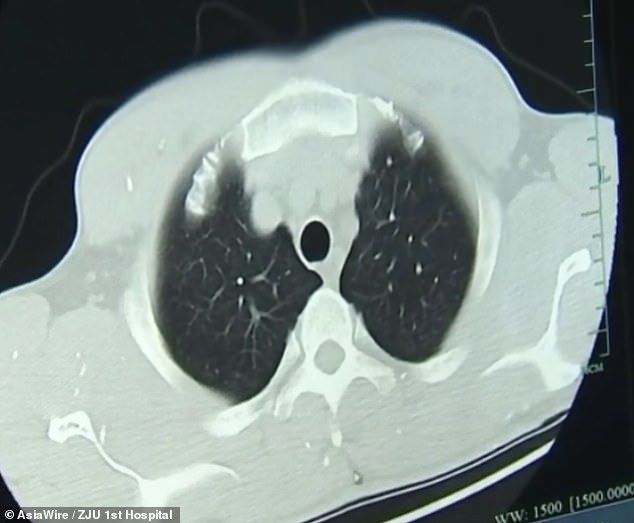 Zhu Zhongfa's chest was riddled with worms' eggs, called cysts. Pictured, a scan of his lungs

More than 700 tapeworms were found in a man's body, including his brain and lungs, a month after he ate uncooked pork.

Zhu Zhongfa, 46, ingested the eggs of the parasite Taenia solium - better known as the pork tapeworm - from his dinner.

The construction worker, of Hangzhou in the Zhejiang Province of East China had suffered regular seizures for the few weeks following.

When he went to hospital, he was foaming at the mouth and losing consciousness, local reports said.

Doctors said the worm larvae had entered Mr Zhu's body through his digestive system and then made their way to his brain through the bloodstream.

The larvae - newly hatched worms - get into body tissues and form cysts there. These cysts can then decay and cause infections.

Symptoms such as chronic headaches, blindness, seizures and dementia follow, but may not appear for years after ingesting the eggs.
A Taenia solium infection, taeniasis, happens after someone eats tapeworm eggs in contaminated or uncooked pork.

Tissue cysts cause the infection cysticercosis, which are particularly dangerous when they occur in the brain or nervous system, an infection known as neurocysticercosis.

The eggs may also mature into adults in around two months. This can happen in various organs of the human body, as well as the muscles, skin, eyes and the central nervous system.

According to Newsweek, Mr Zhu revealed he had eaten a hot pot about a month ago and he was unsure the pork was fully cooked.

He sought medical attention after suffering from regular seizures and random fainting over a period of a few weeks. 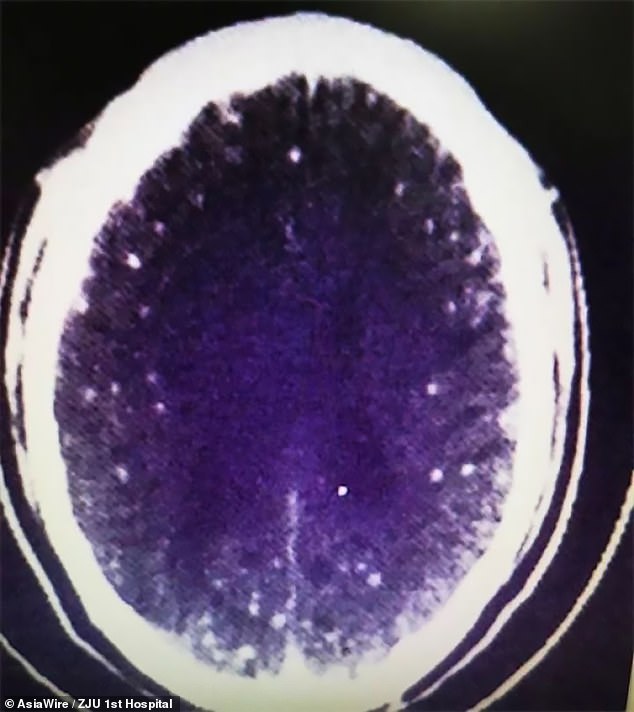 The cysts had also reached his brain (pictured, the white blobs in a scan of his skull) causing seizures and lack of consciousness

These revealed that Mr Zhu's brain and chest were riddled with cysts of the pork tapeworm.

Dr Huang said: 'He not only had numerous space-occupying lesions in his brain, he also had cysts in his lungs and chest muscles.

'Different patients respond differently to the infection depending on where the parasites occupy.

'In this case, he had seizures and lost consciousness, but others with cysts in their lungs might cough a lot.'

Dr Huang added: 'We killed the larvae using antiparasitic drugs and prescribed medication to protect his organs and reduce any side effects brought on by the treatment.

'Phase one of the treatment has now concluded after a successful week. Now we'll run further tests.'

It is still unclear whether Mr Zhu will suffer any long-term effects from the tapeworm infection.

Cysticercosis and neurocysticercosis are most common in farming communities in developing countries in Africa, Asia and Latin America.

In 2015, the World Health Organization identified T. solium as a leading cause of death from food-borne diseases.

The parasite has been virtually eradicated in the US and tapeworm infections are rare in the UK.