A group of African-Americans have come all the way from the the United States of America to trace their roots to Anambra.

The African-Americans traced their roots to Anambra
A 2016 report from the United States of America Census Bureau placed the number of blacks in the country at 40 million. This number was majorly offsprings of the 10.7 million slaves who survived the dreaded middle passage and were disembarked in North America, the Caribbean and South America.
According to Trans-Atlantic Slave Trade database, a total of 12.5 million Africans were shipped out of the continent between 1525 and 1866. While some of these African-Americans have been able to trace their countries of origin and even ancestry, with the help of peculiar ancestral stories that have transcended generations; some others seemingly do not care a hoot about their origin.
There are still those so eager to locate their ancestry but yet to succeed in the quest for identification of their ancestral roots. These people are ready to walk the extra miles, including subjecting the African locals to a DNA test to identify where they truly belong.
Daily Sun learnt that the apex Igbo organisation, Ohanaeze Ndigbo, has over the years been involved in their quest for identity. Some prominent Igbo traditional rulers and Ohanaeze chieftains would normally identify with the Igbo Americans during their annual ceremony at the Igbo Village in Staunton, Virginia, United States of America.
President, Ohanaeze Ndigbo, Enugu State Chapter, Chief Alex Ogbonnia, said it was at such outings that it was resolved that any of the desirous ones could be assisted to visit Nigeria and possibly trace their root.
In that regard, a contingent of Americans of African descent recently landed in Anambra State in search of its ancestral root. The voyage of discovery tagged “Root to Glory Tour,” took them to Obu-Gad, Aguleri; regarded as the historical origin of the Igbo race, for Eri festival. They were later hosted to African cultural festival at Rojenny Stadium and Tourists Village, Oba, near Onitsha.
A similar contingent had visited during the Eri festival in 2012. Filled with nostalgia, they passionately appealed to Nigerians and African families to assist their quest by conducting DNA test to enable them connect with their relations.
One of them, Ms Denver Beaulieu-Hains, based in Maryland, United States of America, was not only convinced she is of Igbo origin, but was insistent that she hails from Imo State. Her confusion remains how to locate the exact place in Imo and her relations:
“My affinity with Africa is that I definitively have a family in Imo State that I connect to, it is more than knowing that I’m from Africa, I am from Imo State but I have not been able to meet my family in Imo.
“The DNA on the internet connects African-Americans like me to my family because the blood does not lie, I am 60 per cent African and it has been good relating with original African cousins.”
For Shirma Charles, based in Toronto, Canada and from the Granada Island of the Caribbean, it was a homecoming. She said she felt much at home because according to her, the way of life of the people here has similarity with what obtains in their clime. 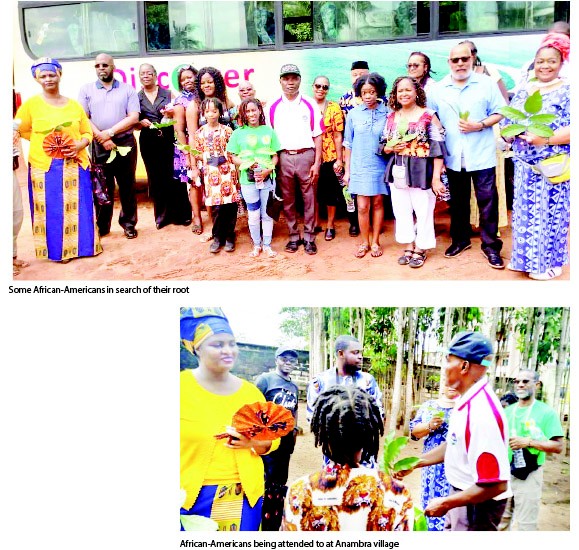 She said she had never believed the negative impression the Western media created about Africa, adding that the Nollywood movies have helped them appreciate Africans as their cousins.
She called on Nigerians and indeed Igbo people to provide their selves; for DNA test to make it easier for them to identify their African roots:
“Africa is home for all humanity, but for us, individuals in the Caribbean of African descent, we are aware as recorded in history that our forefathers were taken from here, the continent of Africa. I had my DNA test to find out where my ancestors belonged to, before they were taken and it brought me to Igbo land; so I am Igbo and I am home tracing the roots of my ancestors.
“I have not been able to find out the state or family where I belong. That is why we are appealing to Igbo people and Africans in general to do DNA test so that when the result matches us, we will know we are cousins.
“The western media will always try to portray Africans in negative light but I never bought into that. Nollywood is very popular among us in the Caribbean and the visuals we get in those movies replicated our environment in the Caribbean.
“Our culture, the way we live, the masquerades and the food (maybe prepared differently) are similar, I am going back with fond memories of the hospitality of my people here.”
Nicholas Quesha from Seattle, Washington in the USA, said insisted his descent was around Anambra, Delta, Imo and Enugu states, adding that he was making great efforts to establish the exact place of his origin:
“I took DNA test about five years ago and was able to identify with 25 Igbo cousins and through phone calls and visits, I was able to know that my ancestors belonged to the Igbo land.
“Houston Texas is the largest Nigerian community outside Africa and I live there, so I don’t have problems of adaptation to Nigerian food because they were already familiar to me. I will continue to visit Nigeria and interact with my DNA cousins.
“What I want to tell people is that they should perceive the world with their own experience and not what they hear in the media dominated by the West, Nigeria is not as bad as they are portrayed. We, the Africans in Diaspora really want to connect with our people back home in Africa.”
For Mr Rabbi Robinson, he is a full American, but decided to be part of the team because his wife is an African-American whose root was traced to Nigeria.
He said humanity is one, adding that there was no need for racism because his visit to Nigeria was one of his finest experiences: “When we get back, we will do more DNA tests to get to the roots of this ancestral relationship, the experience is awesome.”
Proprietor of Rojenny Tourist and Games Village, Rojenny Ezeonwuka, said the “Roots to Glory Tour” team now has first-hand experience of Africa and could now go back to their Diaspora homes to tell them that they had another home which was willing to accept them. He called on African leaders to assist the willing Africans in diaspora in their quest to identify with their brothers and sisters at home.
After the Anambra expedition, tears of joy flowed freely at the Government House, Enugu, when Governor Ifeanyi Ugwuanyi played host to the contingent. They were amazed by the warm hospitality and reception accorded them with President-General of Ohanaeze Ndigbo, Chief Nnia Nwodo, in attendance.
Ogbonnia noted: “There are tears of joy on their faces that they have discovered their origin and overcome their identity crisis.” He disclosed how he gave one of such African-Americans the Igbo name of “Chisom”, three years ago, at the Igbo Village in US, after listening to her story.
Leader of the group, Ada Brown, thanked those who made their visit back home possible and accorded them warm hospitality: “This is so important and remarkable for those who are looking for their home.”
Culled from Sunnewsonline
Top Stories

Oh No! See The 10-year-old Boy Locked Inside Animal Pen For 2 Years By His Wicked Stepmother (Video)
Popular Stories

Comedian, Real Warri Pikin Explains How She Met Her Husband, Reveals The Craziest Thing A Fan Has Done To Her