We Won't Abandon You - FG To South African Returnees


The Federal Govt has assured Nigerians who returned from South Africa during the xenophobic attacks that they would be well taken care of. 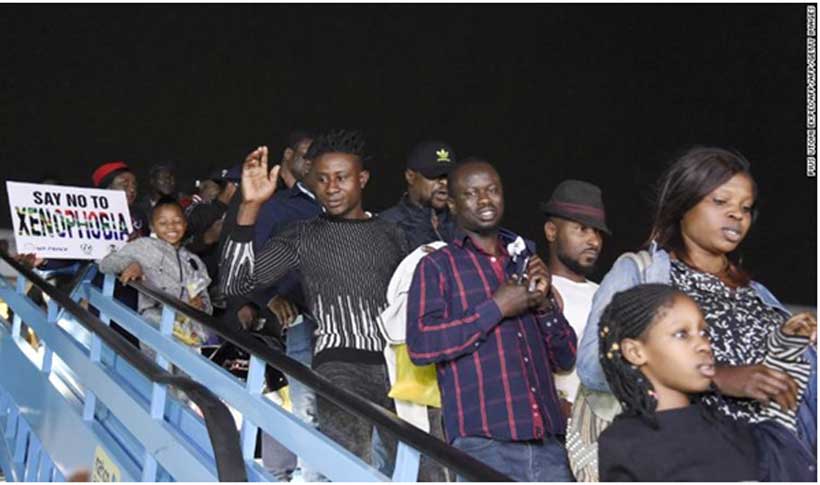 The Federal Government of Nigeria has assured Nigerian returnees from South Africa that it will not abandon them to their plight, as it continues with rehabilitation and empowerment programmes.

The assurance comes with the Nigerian in Diaspora Commission (NiDCOM) offering a scholarship to a returning child in the aftermath of xenophobic attacks against Nigerians and other foreign nationals in South Africa.

NiDCOM Chairman/CEO Abike Dabiri-Erewa gave the assurance Thursday when she had audience with a returnee widow, Mrs Yinka Iyoha.

She said that the government will not abandon Nigerians returning to the country as a result of xenophobic attacks.

The widow’s plight attracted the notice from of Nigeria, which donated a cheque of N1 million through NiDCOM to her and her four children to start a new life back home.

Dabiri-Erewa equally announced a scholarship to one of the children of the returnee courtesy of the Commission.

The NIDCOM head said that the Federal Government is kick starting an entrepreneurship programme for the returnees in collaboration with Small and Medium scale Enterprises Development Agencies (SMEDAN) and National Directorate of Employment (NDE).

She mentioned that the returnees will be trained on various skills and certified, mentored and funded by the Central Bank of Nigeria. In addition, funds from N1 million to N10 million naira will be released for the programme.

Dabiri-Erewa appealed to other state governments to liaise with the returnees in their respective states and support the rehabilitation and reintegration schemes.

“We can only hope to work for peace and unity among Africans as the Nigerian mission had a programme in Johannesburg, South Africa entitled UNITE AFRICA, geared towards eradicating xenophobia in South Africa,” she said.

While encouraging African unity, Dabiri-Erewa said that Nigerians in South Africa are working with their counterparts to ensure the outcome, reminding those who commit crimes that they will face the penalties.

Receiving the cheque donation, Iyoha appreciated President Muhammadu Buhari, Dabiri-Erewa, Airpeace, Multichoice and Nigerians for assisting her and other returnees in their speedy rehabilitation and reintegration.

“There is no place like home and I am very happy to be back home,” she said. “What we experienced in South Africa we cannot describe it, it was like living in the wilderness.”

Iyoha, who lost her husband in 2010 in South Africa, has been solely responsible for raising her four children, complained abiut her business crumbling as a result of what he described South Africa’s hostile trade policies.

As a businesswoman, she explained, “it was very tough for me as I lost over 20 million worth of goods due to the South African Customs seizing imported goods from Nigeria.”

It will be recalled that an anonymous Nigerian and a cancer survivor  donated her one month salary of N500,000 through NIDCOM in October to assist South Africa women and child returnees.