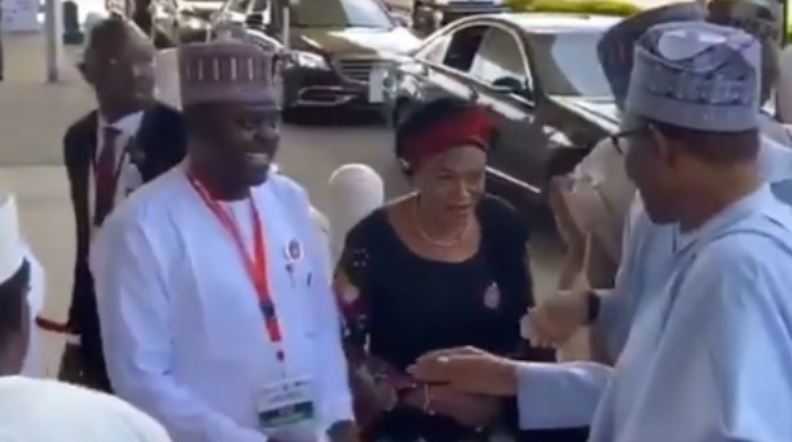 Buhari refusing to shake hands with Remi Tinubu
A video showing the moment President Muhammadu Buhari seeming refused to shake hands with Senator Oluremi Tinubu while greeting other dignitaries on the sidelines of the E-Nigeria International Conference, Award and Exhibition in Abuja on Thursday has elicited reactions on Twitter.
In the video which is about 18 seconds long, Buhari is seen alighting from his official Mercedes Benz at the International Conference Centre, Abuja after which he is welcomed by the Minister of Communications and Digital Economy, Isa Pantami.
The President subsequently shakes hands with the Governor of Nasarawa State, Abdullahi Sule, who is standing next to Mrs. Tinubu, who is the Chairman, Senate Committee on Communications.
Senator Tinubu, who curtsies twice, is, however, not get a handshake from the President and she didn’t extend her hand for one.
Buhari subsequently skips her and goes on to exchange pleasantries and a handshake with Inuwa Abdullahi, the Director-General of the National Information Technology Development Agency.
The President’s action, however, caused a debate on Twitter.
While some said what the President did was not wrong, others said the action was evidence that the President believes that women only belong to the “kitchen and the other room,” a  claim he had once made while talking about his wife, Aisha.
Twitter user, @donaldnihio tweeted, “The woman was totally ignored. Eyah! Inside life,” while, @emperorjissy tweeted, “There s no possible way he would have had a handshake with Remi Tinubu there. The minister was obviously blocking her and she was not putting her hands forward.””
But @Aladay7 said, “After watching the video several times, I can conclude that President Buhari did not shake her because she was not one of the people on the welcome team.”
@JamaalHQ7 said, “After bending her knee twice, bubu still blocked her.”
Watch video below:
Top Stories