Married couple, Matthew and Abiodun Adeoye who went viral after their video of appeal for help over the activities of the land-grabbers have abandoned their home and now living in fear. 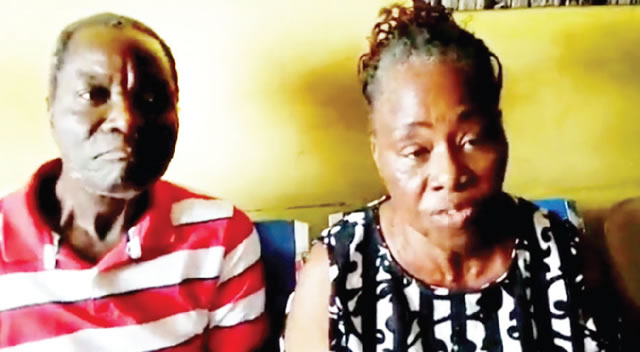 A sexagenarian couple, Matthew and Abiodun Adeoye, whose property was allegedly seized by land-grabbers, have abandoned their home following repeated threats and are now living in fear.

The couple became an Internet sensation as the video of their appeal for help over the activities of the land-grabbers went viral.

The Adeoyes had alleged that land-grabbers, led by some operatives of the Special Anti-Robbery Squad, Abuja, forcefully occupied their property, which was being used as a car park for an event centre being run by them.

They said Matthew was abducted by the land-grabbers when he went to confront them on why they were building on the piece of land located at No. 33, Egbe-Ejigbo Road, Oke-Afa area of the state.

Abiodun told our correspondent that their trouble started on April 18, 2019, when the land-grabbers invaded the land and destroyed their property and started erecting a structure on it on the same day.

According to her, all efforts to get the land back have proved abortive as the alleged land-grabbers have become evasive.

She said, “We had a place we had been using as an event centre for the past 12 years, but for the first three years the business was slow and we discovered that it was because of the lack of adequate parking space.

“There was an empty piece of land opposite the centre and we approached the owner to make our intention known that we wanted to buy the land.

“My husband collected his gratuity and we used it to buy the land and since then, we had been on it, but on April 18, 2019, we were on the property and suddenly we saw vehicles with tinted glasses invading the property through the second part of the land that was sold to the defunct Oceanic Bank, which occupied an uncompleted building.

“At first, we thought the occupants had chased hoodlums to the building, not knowing that they were looking for us. The SARS operatives started jumping the fence into our property and destroying the gate.

“They started harassing everyone on the site and when my husband approached them to ask what was happening and introduced himself to them, they started harassing him and when he tried to make a call, they pulled him by the clothe and made him sit on the floor. When I saw what was happening, I ran to the palace of the Elejigbo, because the monarch was aware when we bought the land from the Ashamu family.

“When I got to the palace, I was told to go to the police station and I went to the Ejigbo Police Station. The DPO told me that it was a civil matter and that there was nothing she could do about it.

“Before we knew what was happening, trucks of sand drove in and they started uprooting our flowers, which we collected a permit for from the Lagos State Parks and Gardens Agency. They started construction on our property that same day, and during the Easter holiday, they completed the construction.

“While I was still at the station, I was called that my husband had been taken away and I ran back to the property and back to the station to report that my husband had been abducted and I started calling his number, but it was already switched off. When it was evening, he called me and when he came back, he started shedding tears and said he was taken to a hotel under renovation to meet one Tajudeen Muritala.

“The man, who led them to the property introduced himself as Mayaki Hamzat Alfa from the SARS in Abuja and said the owner of the land wanted to take possession and that we were chasing them away with guns, but we told him that nobody had ever come to claim ownership of the land, but it was later that we got to know that one of the late Ashamu’s sons, Tunde, sent the land-grabbers.

“On July 21, 2019, Tajudeen Muritala came to the Lagos State Task Force on Land-grabbing’s office in Alausa with his lawyer and one Fatai Amodu, who claimed to be Ashamu’s manager, and they pledged that they would return our land to us and that we would settle the matter; when they were asked when we would come back for the report of settlement, they told the officials that Amodu was going for the hajj and that they would come back when he is back, but since then, we have not heard anything from them only for them to erect another building on the land.”

Abiodun added that when they went for another meeting in Alausa on November 21, a dispatch man came to deliver a letter to them there, adding that when she inquired where the letter came from, she was told that it was from the Inspector-General of Police’s Monitoring Unit.

The woman, who noted that she and her husband had not been able to go home since that day, said she was surprised how the dispatch rider was able to identify them and knew that they were in the office.

She added, “Since April that this incident happened, I have not been able to work because I now suspect every call, thinking that the land-grabbers are the one calling. I cannot have meetings with my clients out of fear.

“We have been moving from place to place because for them to be able to identify us in the midst of so many people, who knows what they will do next and that was why we have to come out for people to come to our aid.”

Meanwhile, the state Attorney General and Commissioner for Justice, Moyosore Onigbanjo, has ordered an investigation into the matter.

Onigbanjo, who is also the Chairman of the Special Task Force on Land Grabbers, urged the couple to come forward for further clarification.

He said in a statement by the Director of Public Affairs in the ministry, Kayode Oyekanmi, “The attention of the Lagos State Ministry of Justice has been drawn to a video, which has gone viral, of a couple, Mr and Mrs Adeoye, from the Ejigbo area of the state.

“In the video, a passionate appeal was made by the couple, requesting urgent intervention by authorities in an alleged case of encroachment on their property by land-grabbers.

“In response to this appeal, the state Attorney General and Commissioner for Justice, who is also the Chairman of the State Special Task Force on Land Grabbers, Mr Moyosore Onigbanjo (SAN), has ordered an immediate and full investigation into the matter. He has also invited the couple involved to a meeting at the ministry for further clarifications.

“The attorney general and commissioner for justice wishes to assure residents that justice will be served in this matter, while the Lagos State Government remains committed to the protection of all investments made in the state.”