In a clip being widely shared online, the three world leaders were caught gossiping about US President, Donald Trump. 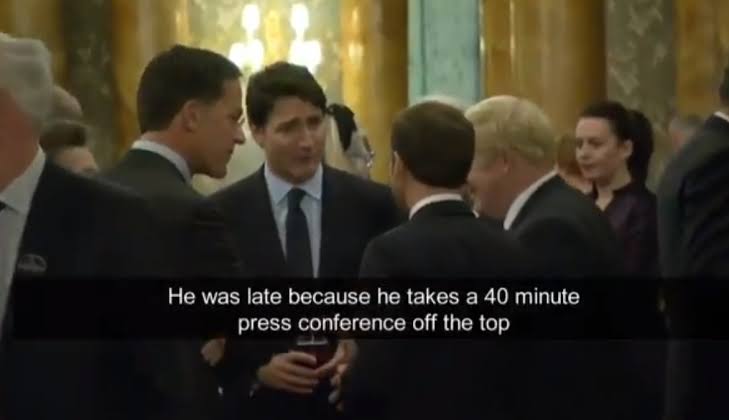 Justin Trudeau, Emmanuel Macron and Boris Johnson were caught on a hot mic at the Buckingham Palace NATO reception Tuesday evening, appearing to gossip about Donald Trump and an impromptu lengthy press conference.

In a clip being widely shared online the three world leaders seem to be discussing why the French President was late during the London summit, held to mark the alliance's 70th anniversary. Princess Anne also appears to be in the discussion but it is unclear if or how she responds.

None of the men mention Trump by name but Trudeau seems to be referring to the US president's talks with the media throughout Tuesday.

Trump spoke at length to reporters Tuesday afternoon after an awkward press conference with Emmanuel Macron, following on from an earlier and equally lengthy chat after a sit-down with NATO president Jens Stoltenberg

In the clip, British Prime Minister Johnson asks: 'Is that why you were late?' Canadian Prime Minister Trudeau, swigging from his drink, shoots back: 'He was late because he takes a 40 minute press conference off the top.'

The video then cuts to a later clip, which is without context, where Trudeau adds: 'You just watched his team's jaws drop to the floor.'  He then motions as if his jaw is dropping. It is not known if Trump is the focus of that comment as the video has been edited.