A Nigerian actress has launched a lifeline for all the ailing and aged Nollywood actors. 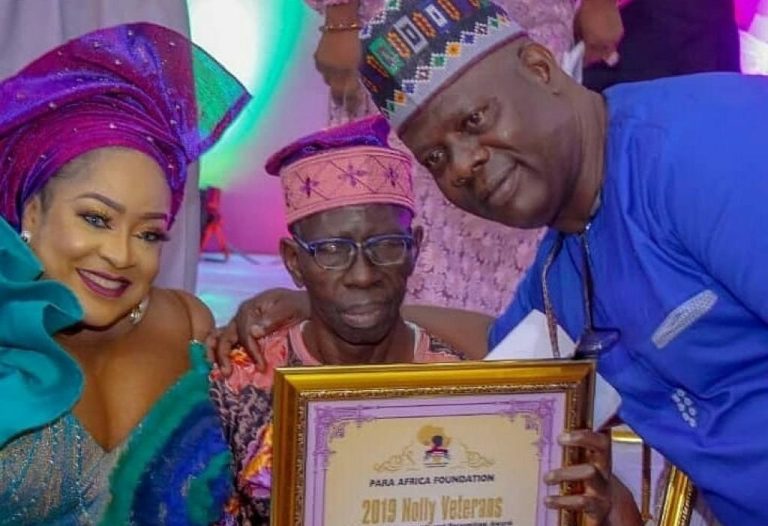 The initiative tagged, ‘Nolly veteran SOS Project 2019’, is an offshoot of ‘Passion Against Rape and Abuse in Africa Foundation’ (PARA Africa) which the actress launched in 2015.

Ms Daramola said she organised the event to bestow lifetime achievements awards on deserving Nollywood veterans and also kick-start a humanitarian initiative in earnest for their upkeep.

Ms Daramola told PREMIUM TIMES that the project is borne out of a decision to cater for aged actors in Nollywood.

She explained that the idea is “for an individual Nollywood actor to adopt a veteran actor and contribute to his or her wellbeing monthly”.

“I decided to come up with the idea of the gesture of this Nollywood veteran social welfare intervention initiative to help raise and build mutual benefits social trust funds to progressively ensure they live a better life,” she noted.

The sight of a visibly sick Pa Kasumu at the gathering had the likes of Yinka Quadri and other actors in tears.

Pa Kasumu was a household name in the Yoruba movie industry until he came down with Biventricular Heart Failure in 2013.

The 66-year-old actor, who featured in several movies in his heyday, has been off the public radar in the last seven years.

Responding to the clamour by concerned fans who asked for Pa Kasumu’s account details, the actress explained, “I don’t want us to concentrate only on Pa Kasumu because we don’t want to neglect the others. We still have the likes of Pa Fedeyi Oloro to take care of too. We have about 45 under our care. We are still in talks with Stanbic IBTC to establish a Nollywood pension scheme.

“I always feel sad, when some aged and generational actors call me on phone, most times, to ask me to help with money, that under normal circumstances, they should be able to afford to get by themselves to take care of their certain immediate needs.

“Some of them call me in the dead of the evenings to ask for ridiculous amounts as low as N3000 to buy food or drugs to take care of their health issues. Sometimes, I find it difficult to sleep afterwards.”

She explained that the aim of PARA Africa foundation is to see that these abandoned and helpless aged actors, who have contributed to the growth of Nollywood live happily, healthily and productively again.

One of the beneficiaries, veteran actor, Peter Fatomilola had nothing but kind words for the actress at the event.

He said, “I am happy to be honoured and given money. We have rich people in Nigeria, but even our leaders didn’t think of this kind of initiative.

“The money meant to be used in taking care of pensioners and the aged is being embezzled. Foluke honoured us despite not having all the resources. She will grow old and make more impact.”

Fuji musician, Alabi Pasuma, ended the event on a high note as he serenaded the veterans with some of his hit songs.